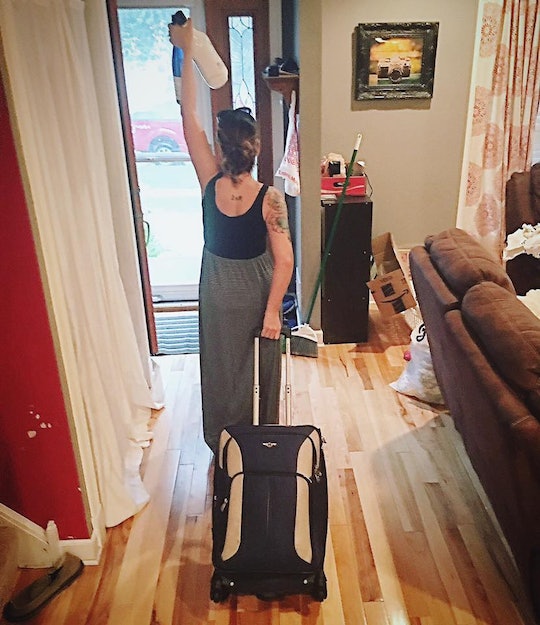 When I read Meghan Maza Oeser’s Facebook post earlier this week, I nearly died from laughter. Why? Because Oeser’s post was thoughtful, honest, and hilarious, and it was chock full of foul language. (Be still my immature heart!) And because this woman and mother's now viral letter to her husband — with advice on how to take care of their six children — was nothing short of brilliant.

More Like This
People Have Thoughts About A Mom Saying That Parents Are "The Real Teachers"
Vaccinated People Can Ditch Masks. Where Does That Leave Kids?
Pregnant Olympian Shawn Johnson Cried When Her Daughter Was Sad At Drop-Off
Give Your Mom A Shout-Out With These Mother's Day Hashtags

You see, Oeser penned the letter because she was heading out on a girls’ weekend. (And from the tone of the post to the picture which accompanied it, it was a much needed girls’ weekend at that.) But Oeser didn’t want to leave her hubby high and dry — the couple does have six kids, after all — so she wrote him detailed, thorough, and hilarious “instructions” on how to make it through the day.

She gave him tips and tricks for surviving breakfast, lunch, dinner, bedtime and bath time, and everything in between. But her advice? Well, her advice was grim and brutal.

Make no mistake, the letter begins innocuously enough, with the loving phrase "my dearest husband." However, before long the tone of Oeser’s letter shifts. Oeser makes it very clear to her husband what he is in for: “hell.”

I’m writing this to you out of love, not fear. I wanted to go over a few things with you before you embark on this weekend alone...with the others. Nighttime, daytime, breakfast time, and somewhere around lunchtime can easily be mistaken for pure HELL, with Satan coming off as a My Little Pony in comparison.

Oeser then describes — in great detail — what “hell” looks like:

Upon arriving home after work, things won't seem so bad...[but] this will be short lived...[as] this is also known as hell hour. The others will fight about anything and everything...it's most likely that Quinn will be pissed off about Penny wearing her Elsa dress, and Penny equally pissed off because Quinn will ONLY refer to her as Anna. Penny will also be fighting sleep...[d]inner will suck. Bailey will want pizza, while Harper will ask for hotdogs. Quinn will cry when you say the word hotdog, and will insist on Mac n cheese (but not the orange kind or the white kind, but the purple kind). We’ll be fresh out of the purple kind, so she’ll then ask for toast. You’ll already have started making mac n cheese for Penny, but since she heard Quinn ask for toast, she’ll also want that toast. You’ll end up tossing the Mac n cheese....[and] everyone will eat cereal for dinner.

Is anyone else exhausted by this? Oh wait, because it gets worse. Oeser then wrote about every parent's favorite layer of hell: bedtime.

Make no mistake, Oeser does offer her husband some sound advice — she tells him what pajamas Penny will want and how to fill the diffuser — but when push comes to shove, Oeser sums up bedtime with seven little words:

(I think someone should etch these mottos on wine glasses. Just sayin.’)

Oeser also covers breakfast and lunch — which, much like dinner, “suck” — before saying “I'll see you Sunday” and signing the whole damn thing: “Kisses. Your wife.”

But seriously, if you have time, are not offended by cursing, and have a sense of humor, read Oeser’s entire letter because it is sure to make you laugh.