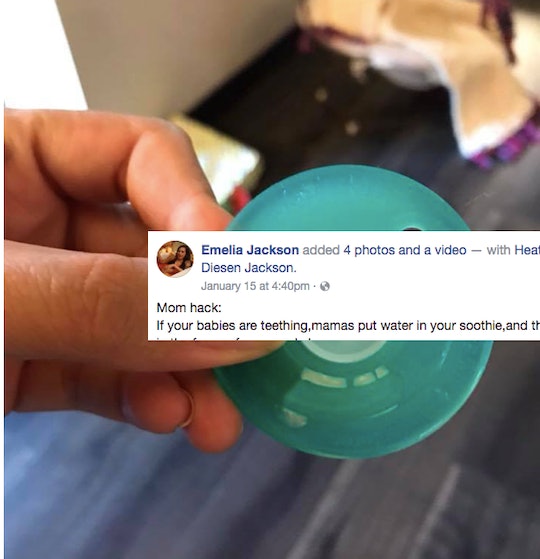 As cute as little baby chompers are, the teething process is no fun for parents or babies. It's painful, frustrating, and comes with a degree of helplessness when caretakers are forced to watch their little ones suffer without having many options to help. For those of you in the throws of budding biters, this mom's pacifier teething hack is pure genius — and you'll probably want to steal it. Using nothing but a soothie pacifier and a bit of water, Emelia Jackson combined comfort and pain relief to help her son get through the worst of his teething pain.

Jackson posted her hack to Facebook on Jan. 15 with a caption that reads:

Mom hack: If your babies are teething, mamas put water in your soothie, and then put it in the freezer for a couple hours. Seriously a life saver for teething mamas. He was so content with his cold binky.

Since then, her post has racked up 23,000 likes, more than 100,000 shares, and roughly 38,000 comments. Many of the comments are users tagging friends with littles at or near teething age, recommending the magic teething trick to help ease their pain. Jackson told CafeMom that she posted the hack in part to help other struggling parents comfort their babies.

To make her teething pacifier popsicle, she uses the popular Philips Avent brand of soothie pacifiers, which can be purchased on Amazon for about $3. She fills them with water, freezes them, and lets her little guy chew away. Jackson tells Romper that she was trying to keep it simple:

I needed something fast and easy — something that didn’t require my early teether to have to really do much. My son is only three-months-old so teething for him is tricky. He can’t really hold things yet and putting object directly in his mouth and wanting him to hold it there does not register in his little brain yet. So we tried this “hack” and it was a lifesaver.

Jackson empathizes with other parents who are struggling with teething babies; she explains the process to Romper as "literally worse than childbirth," in her opinion, because of all of the unknowns:

Go ahead and think I’m dramatic, but with childbirth you know what to do. Get the baby out, throw a cold pad in your undies and you’re done (at least for me it was that way). With teething, you have no idea what to expect. This little person that is in pain can not just be like “Hey mama, rub some gel on my gums and give me a popsicle; it’s time for me to make some teeth.”

Some commenters on the post expressed concerns over Jackson's baby consuming water at such a young age. While it is true that drinking water can be dangerous for very young babies, an edit added to her original post clarified that the baby isn't actually getting any of the water:

Since there are so many people freaking out thinking my little man is drinking the water, I want to show you that there is NO hole in this binky. And absolutely NO way for the baby to get the water.

Frozen teethers are a popular choice for parents looking to ease aching gums, and for good reason. Teething usually begins around six months and can last up to two years. And while Jackson's pacifier hack may not be ideal for the older stages of teething, it works well for a little one who can't hold onto a teether. Other options for pain relief include frozen waffles, rags, and breastmilk popsicles. Whatever works, right?