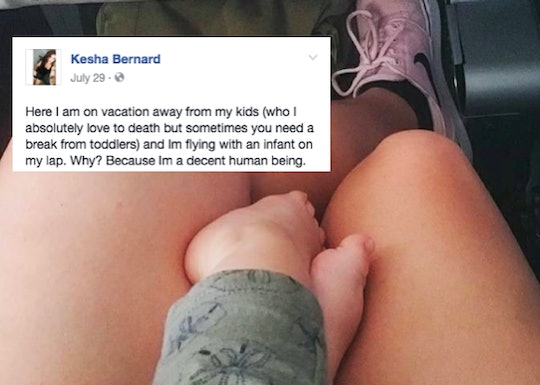 Babies cry. It's a fact of life. They don't care when or where they cry because, well, they're babies. Moms have been apologizing for the cries of their young ones for years, especially in confined places, especially airplanes. But this mom has a powerful message for anyone upset by crying babies on airplanes.

According to her Facebook post, Kesha Bernard was jetting off on a solo-vacation without her kids when she noticed another mom in need of some assistance. She offered help to the mom and went on to share her story. The message behind her since-viral post is the importance of helping each other and it is an inspiration.

Bernard is a photographer based in Atlanta who was traveling from Seattle to Denver. Despite traveling alone, without her two toddlers, Bernard didn't hesitate to help when she noticed no one else around her was helping a mom in need. Bernard later posted a photo of herself holding the other mom's baby on Saturday with an explanation of the situation. Her caption started out:

Listen.....it takes a village to raise kids OK? And as a mom of a 3-year-old and 4-year-old I KNOW this. And I also know that toddlers can be a**holes......so first let me just tell you what happened.

According to her post, Bernard heard a baby crying before take off. Shortly after, the baby's toddler sibling joined in on the cacophony and raised the on-board volume even higher. A seasoned mom herself, Bernard first attempted to tune out the crying. She wrote, “I have mom powers and totally ignore it."

It wasn't until she overheard another passenger complaining to the mom of the two children that she decided to step in:

While this is happening the freaking flight attendant is just standing there ... listening. Not even doing anything. And the older men beside me make remarks like ‘obviously her way of discipline isn’t working.’

After no one came forward to relieve some of the pressure on the mom, Bernard decided to do something. Despite the fact that the poor woman was traveling alone with her three children, none of the other passengers felt the need to assist her. Bernard calmly walked to the mom and asked if she could help. After the mother handed her baby to Bernard, things got a lot better:

The crying stopped (it’s a miracle) so I’m sitting here holding this precious baby that so happens to fall asleep (swooooon).

She reportedly held the baby for about an hour, according to the Huffington Post. After sharing these sweet details of the experience, Bernard closed out her post with a call to action for compassion:

Be nice and considerate. If someone needs help for God’s sake HELP THEM. Complaining and mumbling doesn’t do a damn thing except make the person that needs help feel worse (words hurt).

Since sharing her story, the post has received hundreds of thousands of likes on both Bernard's own page and the popular page, Love What Matters. The moral of this story is to have a heart and help when you can. No one likes listening to a crying baby, especially that baby's mama. Rather than roll your eyes and judge, consider helping out. Like Bernard said in her post, it really does take a village.