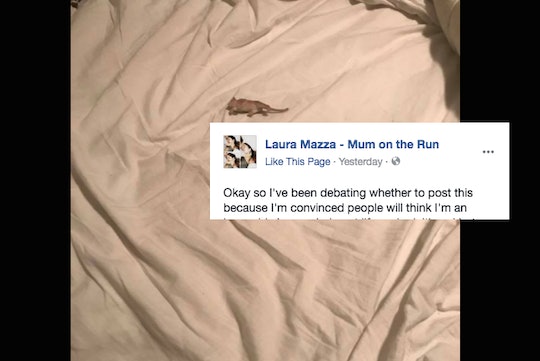 Laura Mazza - Mum on the Run/Facebook

Murophobia is no joke: The fear of mice is real, no matter how irrational it might be when humans are more than 20 times the size of a mouse. I personally cannot stand mice — they just skeeve me out big time. That's what makes this mom's viral post about finding a mouse in her house so relatable, because I think it's safe to say that many moms share this irrational fear of these tiny, gross, creepy little rodents. Laura Mazza is an Australian blogger who writes at her blog, The Mum on the Run. On her blog's Facebook page, she opened up about a terrifying — and ultimately hilarious — encounter with a tiny furry critter in her son's room.

"Today I saw a mouse in my sons [sic] room. A mouse," Mazza wrote on Facebook. "Stewart Little has decided to come in my house and set up camp near my sons [sic] drawers." Just reading Mazza's post, I could feel my blood run cold. Her reaction was equally as terrified as she continued: "I saw it and I froze. And it was the kinda freeze that you feel like you shouldn't even breathe. Where your air escapes your lungs."

Hang onto your yoga pants, because it's about to get a whole lot crazier and more hysterical — literally.

Mazza immediately called her husband, only managing to choke out the singular word: "Mouse." Meanwhile, this is what her inner monologue was trying to say to her husband in her state of sheer panic:

I decided to call my husband because there's a mouse in the house, and when there is a mouse in the house other than blow torching the house down there isn't much in the way of rational thinking. He answers the phone and I say "mouse" I stutter because I'm fucking terrified. This is no Mickey Mouse okay. This is ratatouille but smaller and he isn't making some delicious soup, he's gonna spray out pebble poo and make babies everywhere and in my sons ears and they'll crawl in my mouth... mouse in my mouth!!!

Oh, my sides, guys. It just gets better. Mazza finally managed to add two more words to her plea, saying only, "Mouse in house." Her husband's immediate response? "Cat in hat." Who doesn't love a clever husband at the exact moment when cleverness is totally not what is needed?

Mazza's husband offers completely unhelpful advice once she's able to clarify there's a mouse in her son's room, and she's having none of it: "Just take it outside or kill it." He may as well have told his wife to defuse a bomb, because there was no way in hell she was going to go anywhere near her rodent intruder. After much back and forth, Mazza was finally convinced to check on the mouse once more, bravely opening the door to find... the mouse was dead.

So, Mazza has now gone from "OMG mouse in house" to "OMG dead mouse in house." A moment of interjection here: As a fellow murophobe, I find the idea of mice skin-crawlingly gross — but a dead mouse? I find myself gagging just thinking about it. Mazza is understandably upset at the prospect of having to approach the dead mouse, let alone scoop it up. Meanwhile, Mazza's husband has to get off the phone because work, real life, and actual problems to deal with.

Mazza then went into full warrior mode to face one of her greatest fears. She wrote:

So I hung up on him. Because obviously I'm alone in this. I'm alone and I need to be the brave one... so I take a couple of swigs of whiskey and say "okay Laura, today is the day you will fight your biggest fear in life and remove a dead mouse from your house"

I said this about 10 times in the mirror before and slapped myself a few times before I bolted down the door and went charging in like a knight in shining armour with a piece of paper screaming like the warrior woman I am and charge up onto this dead mouse in my house and I realise ...

It was never a dead mouse at all on the floor of her son's room: It was a tiny toy leopard. "Stewart little is really Stewart leopard," Mazza mused on Facebook. From a distance, I can totally see how she would have thought her completely harmless plastic invader was actually some kind of dead rodent. Props to Mazza for not only facing her fear, but sharing such a hilarious story with thousands of other moms and families who've shared her post all over social media.