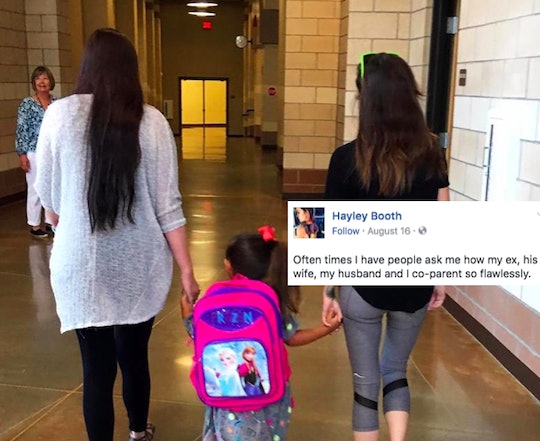 Co-parenting can be tough. Anyone who has a blended family (or who recently binge-watched Big Little Lies) knows this. But one mom's viral post about her daughter's stepmother shows that working through the difficulties of co-parenting is totally doable. In fact, not only is it doable, it can lead to an amazing outcome for both the children and the parents involved.

Hayley Booth, a mom from Oklahoma, wrote a Facebook post all about how she and her husband raise her daughter, 4-year-old Rachel Elizabeth, alongside her ex and his wife. Booth's secret to flawless co-parenting? "We just love our daughter," she wrote on Facebook. "Seriously, it's just that simple." All the parents don't want to make Rachel's life any harder by getting her involved in adult drama, so they just... don't.

Sure, her daughter may call her stepmother "mommy" too, but Booth has learned to be OK with that. After all, Booth wrote in the post:

She IS her mommy. She is there for her always, she takes care of her, she plays with her, she teaches her life lessons and how she should behave, she gives her hugs and kisses goodnight, she does everything any mother would do.. But most of all she loves her like she is her own. It takes a very special woman to take a child that they didn't give birth to, under their wing and become their mother.

Of course it's only natural to have difficulty sharing one's child with a new parent, and to let a bunch of resentments and fears creep in. But Booth told Romper that she was particularly motivated to raise her daughter in a drama-free blended family because of personal childhood experience. Her parents divorced when she was 5 years old, and she often ended up involved "in all of the adult things that no child needs to hear or see."

So although it was difficult at first to deal with the idea of her own daughter calling another woman "mommy," Booth worked through her fears. And then, something incredible happened. Turns out that Rachel wasn't the only one who grew to love her "bonus mommy" Dakota. Now, Booth and Dakota are friends in their own right, with Booth telling Romper:

We talk almost everyday, and we don't just talk about our daughter. We talk about things going on in our lives, problems we're having, you know... Things any friends would talk about. It took about a year to become this way, but she's become someone I rely on for a lot of things, and I will forever be grateful for her.

The co-parents live about 20 minutes apart from one another, and share parenting time equally. Booth and Dakota even walked Rachel into her first day of school together.

No wonder Booth's post struck such a nerve. It has been shared nearly 20,000 times. Booth told Romper that she was "so thankful that it is reaching people," and really hopes "that it reaches the people who need it the most."

Because after all, as she wrote in her original post: "Sometimes you just have to put the petty little things aside, to raise your child to be the amazing human being they are meant to be." The more love, the better!