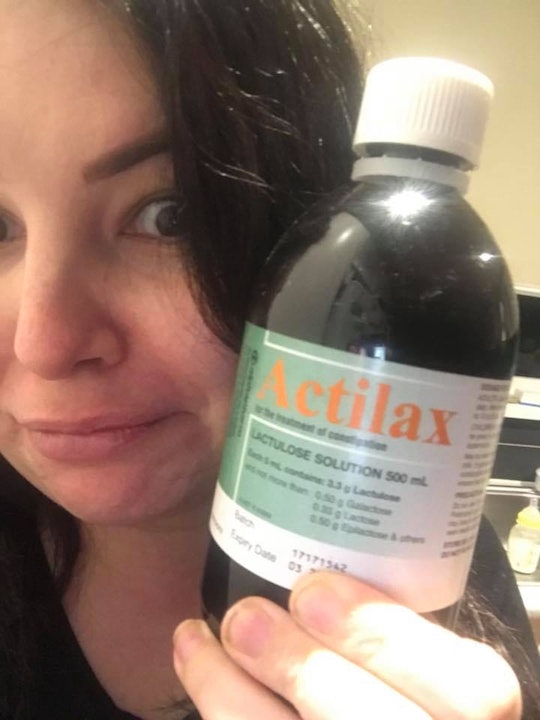 While I had a pretty good idea of the pain and suffering that would come with pushing out my daughter, I was less prepared to endure the pushing that would come later. Seriously friends, that first trip to the bathroom after baby is no cakewalk. If only I had read this mom's viral post about her first postpartum poop prior to delivering my own Tootsie Roll; perhaps I would have been less surprised.

Following the birth of her third child, Laura Mazza, mom and the voice behind the popular blog Mum on the Run, took to Facebook to share her experience in the bathroom after delivery. Suffice it to say all was not smooth sailing for her in the BM department and she didn't hold back on the details when regaling it to her nearly 200,000 followers — and they appreciated her honesty.

That first postpartum poop can bring up a lot of emotions: fear, stress, relief, and more. For that reason, there are a number of articles online that provide women with advice and warnings about going Number Two. But I doubt any of those would have prepared Mazza for what occurred in that labor and delivery bathroom. So, without further ado, here's how it all went down.

Following the delivery of her youngest son, Mazza was "asked constantly" if she had managed to pass gas yet — the answer to which was "always no" for some time. She explained in her post that her failure to break wind was particularly painful because it meant she was restricted to a liquid diet. Mazza shared that she didn't know why that was and "never asked," but I'll fill you in. According to Café Mom, Mazza delivered via C-section, and Then Health Site reported that that first postpartum poot lets doctors know that you are recovering from any anesthesia and everything is working internally as it was before.

With the help of a few good laxatives, Mazza was on a roll. Or, as she put it:

The Ronda rouseys came hard and fast for the next 12 hours. They got smellier and smellier. I knew that every time a nurse came into my room they were punched in the face with the smell, which I actually blamed on the baby. Yes a newborn baby. I was desperate. I even had one nurse sympathetically say “oh yeah they can really be smelly”... we both knew who was really responsible for the tear gas steamers. But bless her soul she tried to make me feel better.

But the train doesn't stop at farts. Once Mazza had managed to squeeze out more than her fair share of gas, the nurses started asking if she had managed to move her bowels since the baby. Alas, she had not. So her "wonderful nurse" slipped her some stronger stool softeners and promised that she would "definitely poop tomorrow." And so she did.

But of course, her body didn't exactly have the best timing. She was breastfeeding when nature called. After trying and failing to keep her little guy calm while unlatching him, Mazza had to make a tough decision:

I knew what I had to do, what I said I never would do. I had to bring him to the toilet and I had to take a sh*t while feeding him. No funniness, no smart arse words here. You don’t shit where you eat! Everyone knows that. But alas, I was gonna breastfeed and take a shit and there was nothing I could do.

Postpartum poops can be scary, but fortunately there are steps that you can take to make things move a little more smoothly. Kate Baer of The Huffington Post recommends taking advantage of all of the poop pain management at your disposal — Ibuprofen, Tucks Pads, cooling creams, stool softeners, wine — and I second that recommendation. She also advises that you stay away from cheese or any other foods that may back you up even more than you already are; instead, opt for fiber, fiber, fiber. Hydration is also key.

Unfortunately, trouble in the restroom often doesn't end when you're discharged from the hospital. Your doctor or midwife will likely prescribe you with a laxative or stool softener to take when you get home, according to Baby Center UK, and you should take it regularly. Along with medication, the site recommends going as soon as you feel the urge, avoiding medications that can cause constipation, aiming for eight to 10 glasses of water per day, and getting in a bit of exercise when you can.

Getting things moving again after pushing out another human, like many other aspects of postpartum recovery, takes time and can vary from person to person. If you're concerned about your poop progress, certainly seek the advice of your medical provider. And remember, this too shall pass — pun totally intended.