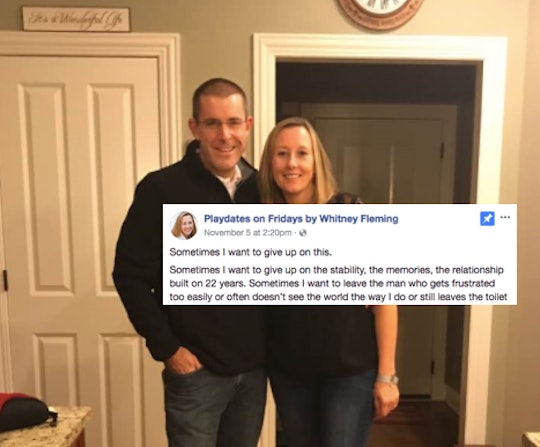 Playdates on Fridays by Whitney Fleming/Facebook

Although it's a bit cliche to say that marriage is hard, sometimes there's no better way to describe a lifelong commitment full of ups and downs. And as many parents know, relationships tend to be more difficult and frustrating when children are involved, which is why this mom's refreshingly honest message about marriage is getting a lot of attention. If you've recently felt fed up with your partner or ready to give up on your partnership, you'll appreciate every word in this mom's post.

On Sunday, Whitney Fleming of "Playdates on Fridays" shared a photo to Facebook of herself smiling beside her husband of 22 years, according to Babble. The seemingly happy photo was accompanied by a long post on the trials and tribulations of Fleming's marriage, and what it feels like to want to "give up" on a long-term relationship from time to time. Fleming's message openly admitted that she's currently "in the season of marriage that is difficult and exhausting and hard," according to Facebook, and that she has considered leaving her husband for a "simpler life, one without conflict or obligation or concessions."

Any person in a decades-plus commitment has probably had moments like Fleming's — times when it seems like the best option is to trade in your life for a new one. The grind of life can wear anyone down, and thoughts of what could have been or what still could be are sometimes difficult to ignore. As common as these thoughts might be, however, not many people have the courage to actually share these ideas with the world. Fleming's note is as brave as it is heartbreakingly real.

Sometimes I want to give up on this. Sometimes I want to give up on the stability, the memories, the relationship built on 22 years. Sometimes I want to leave the man who gets frustrated too easily or often doesn’t see the world the way I do or still leaves the toilet seat up upon occasion. Sometimes I crave a simpler life, one without conflict or obligation or concessions. Because sometimes marriage is just hard, too hard to see it through to the end. This smiling woman in the photo is not the same person at 44 as she was when she met this man at 22. She is hardened and jaded and often feels broken. She is more compassionate to those in pain because she also suffers; yet sometimes she forgets to dispense empathy upon those closest to her. She puts others' needs before hers because that is simply what mothers do; although sometimes she resents it. She loves hard and full and fierce; but sometimes she wonders if that is enough. Sometimes I want to give up on this – and I’m not sure what stops me. Certainly, it is the three young faces that stare back at me over the family dinner table. It may be the fear of living a life without a partner. Perhaps it is the complications of separating two intertwined lives. It would not be uncommon or unusual. I've watched couples disintegrate before my eyes because of tragedy or betrayal, and other unions slowly rip at the seams because two people grew apart or sought different lives.

If you Google "give up" and "marriage" you'll be directed to a ton of advice columns and personal essays on how to keep a marriage together. My point is, Fleming's feelings are common and totally normal. There's no shame in feeling like some of your marriage's or relationship's "spark" has dulled on occasion — in fact, a 2015 survey conducted by the Institute for Family Studies found that "more than half of married individuals (ages 25–50) say they have had thoughts about divorce, either in the past or currently, spoken or unspoken."

Although Fleming has had some tough moments with her husband, she's aware that their good memories outweigh the bad ones. More importantly, Fleming points out that relationships are always waxing and waning — sometimes you have to wait out the hard parts for better times. Fleming wrote, according to Facebook:

So, sometimes, when I want to give up on this, I look, I mean really look, at the pictures of us. I see the multitude of lines that adorn our faces, the result of so much joy and laughter shared between two souls. Each smile reminds me we overcame the pain of miscarriages and infertility and deaths and illnesses that we endured only by grasping each other tightly. The sight of us touching reminds me of how just simply grabbing my hand used to take my breath away, and still does upon occasion. And I look into his eyes, and I see that he is still the most decent man I have ever known. Sometimes marriage is hard, harder than maybe it should be. Giving up may be logical, easier or sometimes even the right thing to do.Sometimes I want to give up on this, but not today. Because although I’m in the season of marriage that is difficult and exhausting and hard, in these pictures and in this life, there is always a new reason to fall in love with this man all over again. So, in those times when I want to give up on this, I am reminded that for our marriage “joy cometh in the morning,” as it always does. As I hope it always will.

Following Fleming's post, many commenters wrote her messages of appreciation and words of encouragement:

Thanks for your honesty and truth! Marriage isn't always roses but it's always worth fighting for!

You are courageous! I echo your sentiments. marriage is hard.

Wow! Just wow! Courage to say out loud what we all think and feel...hang in there sister and know that on most days I am hanging there with ya... by a thread!

Obviously, it's important to point out that there's absolutely no shame in divorce or separating. There are plenty of people who aren't in healthy or safe relationships, and they have all the right in the world to leave for a better situation — and they should. No one has the right to judge a person for ending a relationship; you never know what is going on behind-the-scenes. Not to mention it's 2017 — divorce shouldn't be a big taboo at this point.

In Fleming's case, however, she's just pointing out the common ebbs and flows of a long-term commitment, and her honesty is comforting to a lot of people.