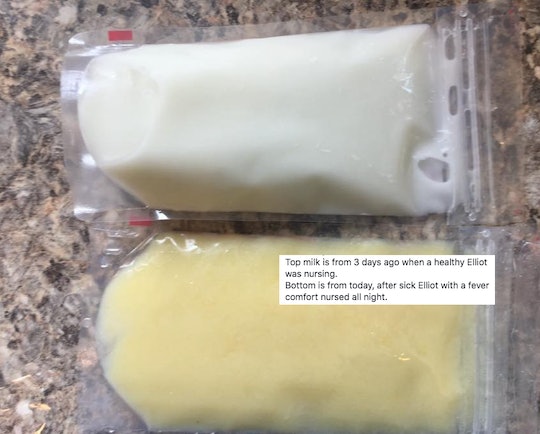 Women are pretty amazing. Females have been fighting the odds, creating humans inside of them, and powering through centuries of sexism. But, in reality, it would be impossible to keep up with all the amazing things women — and their bodies — do. One such example, though, would be childbirth, and all that it entails. Growing a little human is hard work, but that isn't all a woman's body does. After giving birth, women can breastfeed, and while not every mother chooses to, or can, it's pretty amazing. In fact, this mom's viral post about the power of breast milk shows just how incredible women's bodies truly are.

Ashlee Chase shared an intriguing photo to her Facebook page in September that has since racked up more than 5,000 reactions, 7,000 shares, and 1,000 comments. In the 29-year-old mom's post, two pouches of breast milk can be seen side-by-side, although they look vastly different. The top pouch shows fairly white breast milk, while the bottom has a definite yellow-ish coloring to it. But, despite how different the two containers of breast milk look, both are from Chase and they're only three days apart.

So, why are they so different? According to Chase, and her doctor, the yellow milk was her body's way of protecting her baby.

In explaining the photo of the two containers of breast milk, Chase listed the many critiques she's received for breastfeeding her 7-month-old baby. Then, she wrote why the picture was so important: "Top milk is from 3 days ago when a healthy Elliot was nursing. Bottom is from today, after sick Elliot with a fever comfort nursed all night."

Additionally, Chase's 7-year-old daughter Peyton had been home sick with strep throat for several days and, miraculously, Chase's younger child, her 7-month-old son Elliot, didn't catch the virus. Why? Well, according to Yahoo Lifestyle, "Leukocytes, white blood cells of the immune system that protect the body against infection and foreign invaders, increase dramatically in a woman’s milk supply when her baby is sick," meaning that Chase's breast milk could very well have changed forms in order to keep little Elliot healthy.

The change was so subtle, though, that Chase barely even noticed it, until she thought that there was actually an issue with it. "I read before that your milk could change for different reasons, but I was so sleep-deprived that morning, I just thought there was something wrong with it," she told Yahoo Lifestyle.

But, as she explained, her body was able to produce just the right cure for little Elliot. "The illness knocked my 7-year-old out for a week, but the baby only got a runny nose and a slight fever the night before I noticed the yellow," she told the news outlet.

And truly, breast milk is pretty spectacular. According to BreastfeedingHeadquarters.com, a mother's breast milk "contains many anti-infective products (including IgA , lactoferrin, lyzozymes, oligosaccharides) and fighting cells (called neutrophils, lymphocytes and macrophages)." So, when your baby is sick, your body may actually adjust in order to best heal them. As certified lactation consultant Leigh Anne O’Connor, told Yahoo Lifestyle, "The baby’s saliva goes back into the breast and then the breast manufactures special milk to protect the baby."

Of course, many mothers are physically unable to breastfeed their children, for a variety of reasons. And many breastfeeding mothers have an incredibly difficult and painful time doing so. Indeed, breastfeeding is no easy feat, but Chase's post goes magnificently far in proving how incredible the female body is.