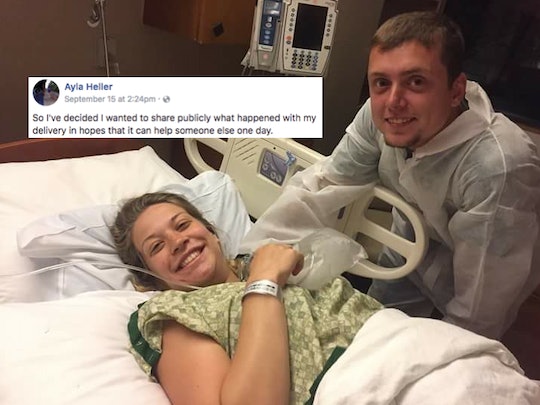 On Aug. 30, first-time parents Ayla Heller and Dalton Henderson welcomed their daughter Madison into the world, and it was a happy day for the young Portland couple. However, as Heller shared in a viral Facebook post a couple of weeks after Maddy's birth, the duo came close to losing their unborn daughter just hours before she was delivered — and it's only because Heller decided to defy common advice that Maddy survived. Now, Heller is hoping her viral post about this common pregnancy myth could help save other babies' lives.

As she explained in her Facebook post, Heller was 38 weeks into her pregnancy when, one morning, she noticed she hadn't felt Maddy kicking very much. Heller didn't worry, since Maddy had had less active days before and they had never been cause for concern. Around noon, Heller felt Maddy adjust position and realized she hadn't felt her baby kick that day, but felt reassured by the movement. After all, when she looked it up, about half of the advice she saw claimed that babies "run out of room" in their mothers' wombs close to their due date.

Fortunately, when Heller and Henderson grew a little more worried, they phoned Heller's mother, who urged them to go into the hospital or call their midwife immediately. When Heller spoke to her midwife, she was told to head into the labor center, where she underwent a series of tests to check Maddy's movement.

"Upon my midwife arrival, she wasted no time to inform me that things were not looking the way they wanted and I was most likely going to have an emergency cesarian that night," Heller wrote on Facebook. "We were informed that if there was life threatening problems with Maddy, which they believed to be a pretty high chance, she would be life flighted over to Randall's."

Heller and her medical team went through with the emergency C-section, and fortunately — aside from needing oxygen upon delivery — Maddy was born just fine despite the scare. However, if Heller had waited another night before reaching out for help, Maddy's story could have ended very differently.

"I was informed that my placenta had aged prematurely, was calcified, and had basically given up," Heller explained on Facebook. Recent research has actually shown that placenta that age prematurely could be the main cause of stillbirths, but as doctors told Heller, scientists still aren't sure why some placenta age more rapidly or how to stop it from occurring. Heller continued:

This had caused Maddy to not be receiving as much oxygen or food as she needed. This was causing her to try to preserve her energy, which is why she had stopped moving. This also caused her to have low blood sugar upon arrival so she needed to be hooked up to a glucose drip IV her first few days. My mother asked what would have happened had I not gone in when I did. "She wouldn't be here" was the reply. She wouldn't have made it the rest of the night.

Many websites and mothers will tell other women that a baby begins to run out of room once they're close to delivery — but as Heller's case illustrated, a baby won't totally stop moving because they're out of space. A change in frequency of kicking is normal (babies can be either a little more active or less), but if a baby stops kicking entirely or their movement slows overall — rather than just for a brief period — call your doctor.

"Babies respond when their mom eats. So after breakfast or dinner, sit in a quiet room and just focus on how many times the baby is moving," Donna Dizon-Townson, assistant professor of obstetrics and gynecology at the University of Utah, told American Baby in 2004.

"You know your body and what's normal for your baby," Heller said in her Facebook post. "Babies will always kick weather [sic] there's much room or not. IF YOU HAVE DOUBTS, GO IN."

While babies' movements fluctuate, a complete halt in movement is not a promising or normal sign — so, if you're expecting, don't assume that the baby simply "ran out of room." Instead, go talk to a medical professional who can help determine whether there's something to worry about.