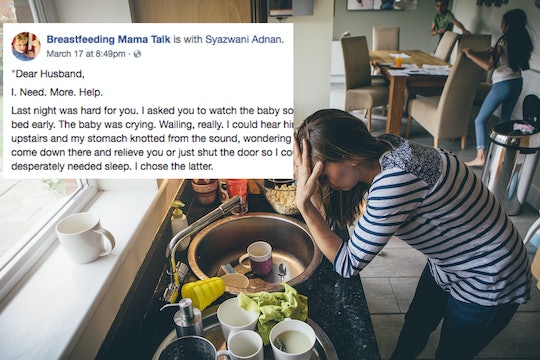 Women around the world face an unequal workload in their homes that is only amplified when they become mothers. Along with their new parental duties, many moms shoulder the burden of housework with little to no help from their partner. Sick of doing more than her fair share, this mom is asking her husband for more help around the house and her words are sure to resonate with moms everywhere. She lays out exactly what she needs from him, making confusion impossible.

Celeste Erlach is a mother of two, with a toddler and a new baby to keep track of. Her days are long and her nights are even longer. After one particularly rough day, rather than stew over all of the help that she wasn't getting from him, Erlach wrote out her needs in a poignant open letter to her husband that details just what she is asking him for. She shared the post with the popular Facebook page, Breastfeeding Mama Talk, where it generated a lot of comments from moms who feel her pain.

"Dear Husband, I. Need. More. Help," she began her post. She goes on to explain that their new baby was crying, "Wailing, really," and she could hear him from their upstairs bedroom. She weighed her options of going downstairs and relieving her husband or getting a bit more "desperately needed sleep," and chose self-care in the form of the latter.

Unfortunately, 20 minutes later, her husband came and passed off the baby. She wrote:

You placed the baby in the bassinet and gently pushed the bassinet just a few inches closer to my side of the bed, a clear gesture that you were done watching him. I wanted to scream at you. I wanted to launch an epic fight that very moment. I had been watching the baby and the toddler all damn day. I was going to be waking up with the baby to feed him all damn night. The least you could do is hold him for a couple of hours in the evening so I can attempt to sleep.

A little bit more sleep isn't all that Erlach is asking for, though. She also explains in her post that she has specific needs all throughout the day. In the mornings, she needs her husband to get their toddler ready so that she can handle everything else and maybe even squeeze in a cup of coffee. At night, she needs a single hour to herself to decompress without having to care for either child. On the weekends, she needs a bit of time on her own to feel like a person instead of just a parent. And finally, she needs a bit of appreciation and recognition every now and then for all that she does.

Erlach also explains that even having to ask for this kind of help makes her feel like a failure:

My responsibility to feed the family, keep the house clean, and take care of the kids is assumed, even as I return to work. I blame myself for most of it too. I have set the precedent that I can do it. And in truth, I want to. I also see my friends and other moms doing it all, and doing it well. I know you see it, too. If they can manage it, and if our mothers did it so well for us, why can't I?

The fact of the matter is that many other moms, maybe even her own, suffered in much the same way that she is, they just kept quiet about it. The household gender gap is nothing new. In 1996, Sociologist Susan Walzer published a now well-known article called “Thinking About the Baby,” that outlined the inequality of the workload at home between partners. Even earlier than that, scholars had already defined the "second shift" of work that waited at home for women, even those who work full-time.

Many of these moms struggle with asking for help when they need it, likely because of societal gender norm pressures to carry this burden with pride, such as Erlach describes herself as feeling. The comments section of Erlach's post is filled with words of support from other moms who are also at their wit's end. One such mom wrote:

I could have written this. My husband is an amazing father and partner, but yes, sometimes I do need that extra help. A pat on the back. A nap. A thank you. An hour of alone time. Why do I still feel bad then when I ask?

But along with the need for moms to ask, dads need to step up and offer without making them do so. One mom brought up the mental load that comes along with motherhood, which can be understood as all of the invisible work that comes with running a household — the planning and organizing and prioritizing that falls to the woman more often than not.

For me it's the burden of the mental load. Let me explain. My husband will do anything that I ask him to do. The problem is I have to ask... for everything. He's genuinely oblivious, not malicious at all. Sink full of dishes? He doesn't see it. He'll say he "just changed the baby"... but it was 2 hours ago. He gladly took the baby out for an hour... walked out the door without the diaper bag. It's stuff like that.

She goes on to explain that it is her job to "remember all of the details," rather than explain it all to her husband. She does it because she has to, and while she doesn't resent her husband because "he's a great guy," she admits that "it would be great for something to just get done without having to ask just once." I have no doubt that Erlach would agree with her.

Erlach tells Romper that more than a letter to her husband, her post is a letter to other moms who are struggling, intended to let them know that asking for help is acceptable — even if it doesn't always feel that way:

Even looking back, I feel guilty for all the times I have asked, and still ask. But people are here for us. Our husbands, our in-laws, the local breastfeeding support group... They are everywhere and they just need you to raise your hand. Raise the flag. It is not admitting defeat, it is accepting victory with support. And that's good for you and your baby.

Moms and dads both need to look at the ways in which they distribute the massive workload associated with running a house and raising children. If there is inequality there, and there likely is, they should work to find balance. Here, like in many aspects of relationships, communication is key.