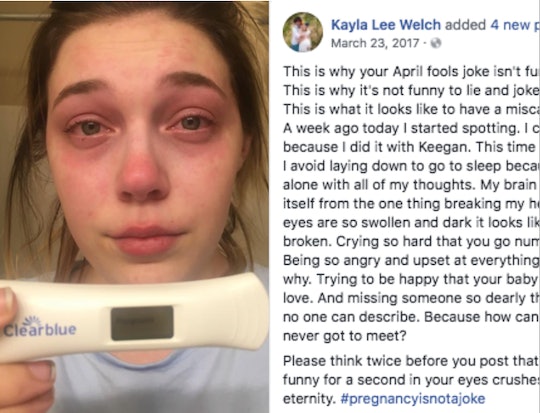 April Fools' Day is right around the corner which means people posting photos of a positive pregnancy test in jest. It's a common gag, with celebs like Lindsay Lohan and Gwen Stefani even taking part, but not one that I would recommend. This mom's viral post shows why pregnancy is not an April Fools' joke. Even when posted with the best of intentions, these jokes can have a devastating impact on those who have suffered through pregnancy loss and fertility struggles.

Just a week after miscarrying in March 2017, Kayla Lee Welch posted her experience to Facebook in an effort to show her followers what miscarriages really look like. She explained that the pain she was going through was exactly why pregnancy posts are inappropriate jokes. Welch wrote that she was experiencing spotting, and convinced herself that it was normal as she had spotted with her first pregnancy — but this time it was not normal. She was miscarrying.

She went on to explain that she was having trouble sleeping because of how painful her thoughts were. "My brain has finally stopped distracting itself from the one thing breaking my heart," she wrote. "And all I can do is cry. My eyes are so swollen and dark it looks like more than just my heart is broken."

After sharing her experience, Welch pleaded with her followers not to use pregnancy as a joke:

Please think twice before you post that April fools joke. Because what's funny for a second in your eyes crushes someone else's heart for eternity. #pregnancyisnotajoke

Chances are, someone reading your post has been through the same hardship as Welch. The National Infertility Association reported that as many as 20 percent of clinically recognized pregnancies end in miscarriage. What's more, an estimate one in four women experience pregnancy or infant loss.

Aside from those who have been through miscarriage, fertility issues also make pregnancy announcements no joking matter. Seeing pregnancy passed off as a joke can be incredibly painful to someone who has been waiting to get that news for real. Helen Stephens, who is the CEO and president of Diversity Fertility Services, LLC explained to ABC News how painful such pranks can be. After struggling to get pregnant and experiencing multiple miscarriages, Stephens knows that pain firsthand:

You have to be empathetic that these women, and men in some cases, are trying to understand why is my body not working. I've had regular intercourse for over a year without becoming pregnant, which is the definition of infertility. Having had my own experiences myself, I hope we'll start to view this pregnancy prank as taboo.

A year after sharing her story, Welch provided her followers with an update. Along with announcing that she is expecting her Rainbow Baby, Welch recounted the pain of losing a child and reiterated her message that fake pregnancy announcements are not a joke:

People genuinely don't understand how awful miscarriage is and that's because no one talks about it but how is that fair to the mother trying to grieve the child she never met? People don't understand you don't heal from this no matter when you lost your child the pain never heals and the people around you never know because opening up is so damn scary.

Welch's original post went viral, racking up over 47,000 likes, over 100,000 shares, and over 500 comments — many of which came from other women who had been through similar experiences. One such commenter wrote:

I agree this is no joke or laughing matter. I have also had a miscarriage in September of 2016 and it was truly the most painful words I have ever heard from a doctor. Nothing can be said or done to ever make it better. Hoping I will eventually get pregnant with our rainbow baby.

Hundreds of others echoed her sentiments and shared stories of their own. This April Fools' Day when you're thinking up how best to prank your friends and family members, keep Welch's story in mind and choose a topic other than pregnancy.

More Like This
6-Year-Old Boy Has Zero Regrets After Ordering $1,000 Worth Of Food On Grubhub
Florida Teachers With “Unvetted” Classroom Books Could Face Felony Charges
Reddit Backs Mom Who Got Scolded By Teacher For Not Inviting 30 Kids To Birthday Party
Jacinda Ardern No Longer Has “Enough In The Tank” & Moms Know Exactly What She Means
What Parents Are Talking About — Delivered Straight To Your Inbox