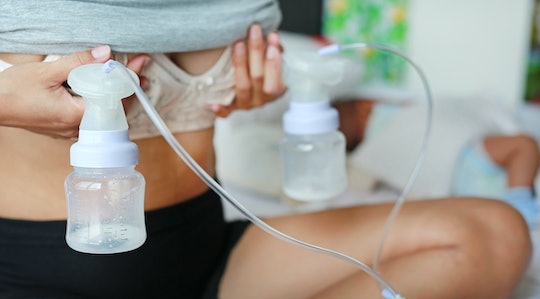 This Mom's Simple Pumping Hack Is Going Viral Because, TBH, It's That Brilliant

Breastfeeding can be tough for many parents (latching issues, breast engorgement, etc.), which is why it's great to see moms sharing pumping tips with one another to ease the struggle. And on Friday, May 31, lactation consultant and mom Joanna Sargeant gifted fans with a pumping hack that has since gone viral. Seriously, guys — this suggestion is a total game changer.

Breastfeeding can easily breed performance anxiety, aka "fear about one’s ability to perform a specific task," according to Good Therapy. From worrying about giving a speech at work all the way to peeing in a public restroom, there are many areas of life where someone might experience this phenomenon. Breastfeeding is no exception to this, as many parents undergo a great deal of anxiety before trying to pump. Whether it's worries about not being able to pump enough milk or general thoughts of self-doubt, there's plenty of potential to feel intimidated.

Sargeant, a mom who runs the Facebook page Milk and Motherhood, is aware of all of these potential pitfalls, which is why she decided to share an ingenious breastfeeding hack with her readers.

"Are you someone who sits and watches the trickle of milk, if any, that comes when pumping? Do you get stressed or sad about your output?" she penned at the beginning of her post. "When I was told to pump after feeding to boost supply, I'd sit there and watch. I'd double pump for twenty minutes after ever feed, and become more and more demoralized at the lack of milk in that bottle."

I bet a lot of parents out there can relate to this feeling, right? In fact, numerous celebrities and other moms have spoken out about this exact issue plenty of times before.

After mulling over her stresses, Sargeant came up with an incredible idea to help her overcome the what ifs.

She said: "I realized that, for my own mental health, I needed to stop watching! Easier said than done. Enter the baby sock. Now I advise mamas to put a sock over their pumping bottle, and it has been getting incredible results."

Although this hack might be seem strange at first, it makes a lot of sense because it's a basic mind over body approach. Putting the sock over the bottle allows your mind to relax and ease the mental pressure, a tactic that can lead to increased milk production.

Of course, this isn't the only method to relax your mind. Sargeant's popular post inspired other parents to share their hacks, many of which included redirection and visualization techniques.

"Great idea. As an exclusive pumper I found that not looking at my baby and distracting myself with emails and messages helped a lot," someone else wrote. "If I thought about my baby I would stress."

Another reader commented: "I used to close my eyes when I pumped and imagine the bottle filling up with milk. The first time I tried it I was amazed at how much milk I pumped."

"I used to close my eyes and take deep breaths and imagine my babe nursing," one person wrote. "Also along the lines of this I’d use my nursing cover so I wouldn’t watch."

That all being said, it's important to point out here that a baby sock or visualization technique might not work for everyone, which is OK. All that matters at the end of the day is the health and happiness of you and your baby.