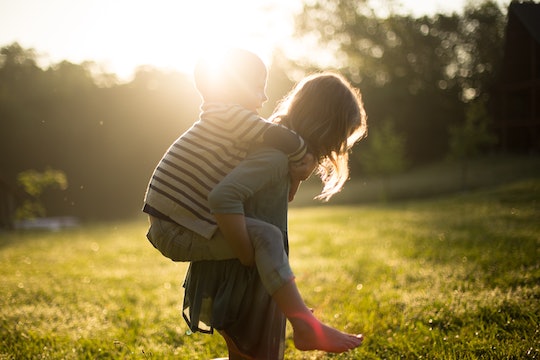 Raising kind and compassionate kids is likely something that most parents would say is important to them, but how many actually intentionally take steps to teach those skills to their children? It's a question that Arizona mom Stacey Gagnon recently posed in a public Facebook post, after her 9-year-old son, Joel — who was born with a rare birth defect that affected the development of his face — was ridiculed by other kids at a church group. It's a reality that isn't entirely unfamiliar to the mom-of-six (four of Gagnon's children are adopted and have special needs), but this mom's viral post about her son is a reminder to parents that if we really want our kids to know they shouldn't fear those who look different, then acceptance and empathy are skills we need to actively teach them.

According to ABC News, Gagnon took to Facebook after she and her husband took their children to a new church. She wrote that she brought her three youngest kids to the children's meeting, where there were "four tables set up filled with kids," but Gagnon said that "the minute [they] walked inside, the room became silent and every child stared or pointed at [her] son, Joel."

As Gagnon explained in her post, Joel's birth defect, a craniofacial deformity known as Goldenhar syndrome, has meant that he is missing an ear and some of the bone structure in his face. As a result, Joel looks a bit different from other kids his age, and Gagnon wrote that in the past she's had to "[step] into the role of teacher to educate kids" about accepting each other's differences. But in this particular instance, it sounds like both her and Joel's hearts were a little bit too broken for her to do that. She wrote,

I stopped and looked to the back of the room where my son had fled to hide. He had buried his head in his arms because you cannot hide in plain sight. My heart sank and the room remained silent as I walked back to Joel. I touched his shoulder and he raised eyes shiny with tears and a face red with shame. I knelt down and asked, 'do you want to leave?' 'Yes', he whispered, and he stood and ran from the room.

As Gagnon held Joel during the remainder of the church service, she shared that her son wrote, "Joel [loves] Mom," on her palm as they sat together. And although she clearly already knew it, the sweet message was a reminder that Joel — and all the other kids just like him who know what it's like to be teased or treated differently because of how they look — deserve so much more.

As crushing as her story is though, and as much as it would likely churn any parent (or human's) stomach to hear, Gagnon's point in sharing it wasn't just to share her sadness or frustration with the world. The real purpose, she explained, was to illustrate the fact that having compassion and understanding for each other's differences isn't something that is innate only in "good" kids — or that it's even something they'll learn from their parents' passive examples. In order for children to actually learn acceptance and empathy and how to be inclusive, she argued, we need to make sure we teach it to them specifically.

Gagnon wrote that she was "not angry," and that she didn't think the kids in Joel's church class "were bad, mean children," just that they had never been taught about the fact that some people look different. And that's a responsibility Gagnon said lies with all parents. She wrote,

Teach your children that many people look different. Show them pictures of people that look different. And then explain that it is not okay to stare at someone that looks different, it's not okay to point. Teach them that my boy is the same on the inside as your child is. He loves Dodge Ram trucks, and Minecraft, and digging in the dirt. He loves ketchup, but does not love broccoli. And mostly, he does not like people staring or pointing out that he looks different. I don't think he needs this pointed out, it's something he lives with everyday.

That message is an important one for all parents to hear, because although many of us would likely hope that our kids would somehow instinctively know better than to gawk or tease a child that looks differently than they do, the truth is that they probably wouldn't. Unless they've been taught that it's no big deal if someone is missing an ear, or walks with a brace or needs a wheelchair, or even if they just happen to have a different skin color (or anything else that might seem different from what they are used to), then their response will likely be the same as the kids in Joel's church class.

Not only will teaching kids about differences help kids like Joel avoid having to feel ashamed or ostracized for who they are — for factors they literally have zero control over — but it will also mean that our kids will grow with an understanding that differences aren't something to be feared. And given that that's a concept that far too many adults still seem to struggle with, it seems like one of the most valuable lessons we could possibly teach our kids.

Gagnon's advice may have been shaped by her own experience, but it's something that experts agree with. In a Q&A with PBS, diversity and human rights speaker Dr. Christopher Metzler explained that, when it comes to teaching children about inclusion and respecting differences, it's not enough to just vaguely talk about respect. Instead, Metzler said that parents "must make a deliberate effort to get out of the familiar and show our children we mean it," and that we should specifically identify and acknowledge the ways that others may be different from us, and explain why those differences aren't any reason to be uncomfortable or afraid. And while we might think we're doing our kids a favor by advocating "difference blindness" (aka, the idea that we shouldn't notice that other people look/speak/act differently than us in the name of political correctness), the reality is that it really just reinforces the very thing we're hoping to avoid: fear, erasure, ostracization.

Having these kinds of conversations with our kids might not come naturally, and if we're not used to speaking openly about accepting differences, then it might feel uncomfortable at first. But Gagnon's story is an important reminder that teaching acceptance and compassion isn't just "the right thing to do." It's about protecting kids like Joel from hurting needlessly — and also about ensuring that our kids grow up in a world that is kinder and more understanding than it may be right now.