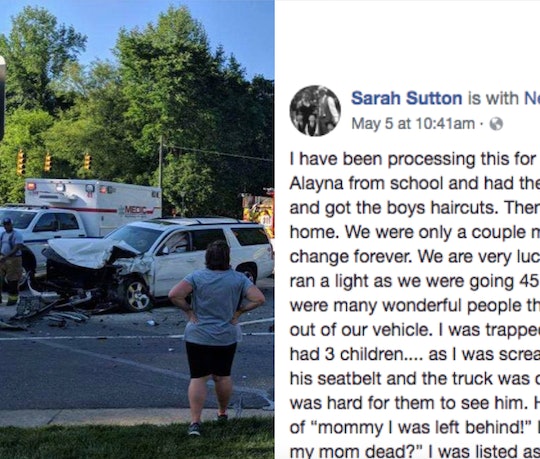 As confusing (and sometimes inconvenient) as car seat recommendations and laws can be, they're there for one important reason: to keep kids safe. They're a result of decades of research and real-life accidents, and following these guidelines — such as keeping children in rear-facing car seats until age 2, waiting until your child meets height/weight/age requirements to switch to a booster seat, and making sure kids younger than 13 are always in the back seat — can literally be the difference between life and death in the event of a crash. And this mom's viral warning about keeping kids in five-point harnesses as long as possible is a must-read.

Mom of four Sarah Sutton of Weddington, North Carolina, was recently involved in a head-on collision that could have ended so differently if her children weren't all safely secured in car seats with five-point harnesses. As Scary Mommy reported, Sutton was running errands with all four of her children on Wednesday, May 2, when it happened just a couple of miles from their home. "We are very lucky that we are here to tell our story," Sutton wrote in a now-viral Facebook post. "A man ran a light as we were going 45 mph and crashed into us head on! There were many wonderful people that stopped. People had to pull our children out of our vehicle. I was trapped inside." She continued:

I remember a lady asking me if I had 3 children.... as I was screaming 'Get my babies!' Liam could not undo his seatbelt and the truck was covered by airbags and filled with smoke. It was hard for them to see him. He did get out. He is now dealing with issues of 'mommy I was left behind!' I was pulled out to hear Alayna screaming 'is my mom dead?' I was listed as critical and so was the other gentleman. He was dead on arrival and they revived him.

Sutton's husband, Neil, and her mother-in-law arrived at the scene to ride with the children to the hospital in two separate ambulances. Sutton was taken in a third ambulance. And miraculously — after undergoing X-rays and CAT scans — it was determined they were all OK. "Thank god for this vehicle that kept the entire cab in tact," Sutton wrote on Facebook. "Thank god I am a psycho mom who did not listen to her kid and let them ride in a booster! 5 point harness car seats saved my kids lives." She continued:

Please I am begging you as a mom to really look at this. This could be you! This could be anyone! I would hate to hear about your poor innocent child that died because of a choice that you made for them that could save their life. My children beat the odds on Wednesday and we are very very lucky they are alive.

The American Academy of Pediatrics (AAP) offers a handy chart for helping parents determine what type of car seat their children should be using. And the organization agrees that: "Children who have outgrown the rear-facing weight or height limit for their convertible car seat should use a forward-facing seat with a harness for as long as possible, up to the highest weight weight or height allowed by their car safety seat manufacturer."

Although Sutton and her four children are still suffering from soreness, trauma, nightmares, depression, and other typical post-accident ailments, according to her Facebook post, it's clear she's aware of how lucky they are. Which is probably why she decided to share her story publicly on Facebook. In just a few days, the post has been shared more than 65,000 times and received more than 27,000 likes.

I'm not going to lie — Sutton's description of the aftermath of her recent crash brought on the waterworks. A few months ago, I was involved in a T-bone crash with my three children in the car. After our van spun and eventually came to a stop, I was in shock. The first thing I did was make sure my kids were OK — and thankfully, everyone was pretty much unscathed. (I was bruised and suffered from whiplash injuries, my toddler bit her lip, and my son's glasses went flying. But that was about it.) Like Sutton and her children, we were pretty lucky that day. And I, too, was relieved that I'm so particular about properly buckling my kiddos into their car seats. Because things could have ended so differently if they weren't.