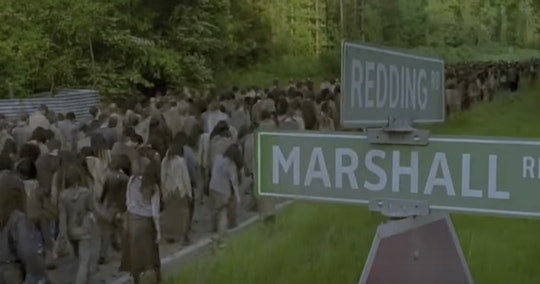 A New Jersey mom and professional photographer just released a series of photos with a bunch of kids, including her own, posed in scenes re-enacting the popular zombie show The Walking Dead. And, as if right on cue, mom shamers across social media are taking the opportunity to tell her what a terrible parent she is for exposing her kids to the show, which is meant for adults. But this mom's Walking Dead photo shoot is really just a bunch of kids playing dress up and having fun in the woods, so maybe the parenting "experts" on social media should save their concern for those who need it instead of a bunch of kids and their parents getting into a bit of cosplay fun.

Alana Hubbard is the mom behind Mother Hubbard Photography and the Walking Dead photo shoot. She gathered 24 kids, all under the age of 7, and headed out into the woods for some dress up and to play what Hubbard saw as nothing more than a game of "modern day cops and robbers," she told TODAY.

But the kings and queens of judgement all over social media wanted to let her know how little they thought of her parenting. Hubbard has deleted most of the critical comments, but a few published by TODAY include this doozy from a Facebook commenter on the photo album:

What you believe is art is nothing more than undermining everything a TRUE parent needs to teach their child! Life is worth living! Showing a child death before they even understand what life is, is horrific! Teach them value so they understand the loss!

Besides the comments calling her a not a "TRUE" parent, whatever that means, Facebook said it was going to block access to her account, which she also uses for her small business. Thankfully, Facebook later admitted that was an error, according to TooFab.

All this ruckus for pictures of a game of kid dress up? And just in case you're wondering, none of the kids had ever seen the show and all the blood and gory stuff was added in with Photoshop after the fact.

I just don't understand what the big deal is. Just about every kid under 7 I know would think getting to dress up and run around in the woods for a bit of cosplay would make for a perfect afternoon.

Now, Hubbard has access to her Facebook account again and is taking all the negative attention in stride. She told Romper she had no idea the images would get so much attention.

"I'm choosing not to focus on the haters," she tells Romper. "But to focus on the fans and the people who appreciate my work! I didn't do this for anyone else other than myself and the parents, and we're all proud of it so that's all that matters."

And there are plenty of fans, including the show's official site, which published the kids' Walking Dead photos for all its fans to check out.

And, for the biggest fans, Hubbard said she's not done with her series of photos paying homage to the show. According to Hubbard's page, the next project she's working on will feature elderly folks playing The Walking Dead.

"If people don't want to see kids playing with toys, maybe they'd prefer grandma," she wrote in a call for models 65 years old or older.

It's a tough call to say which photoshoot will be more epic.