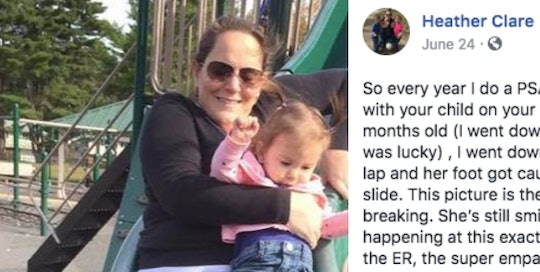 As a millennial mom of two kindergarteners, I generally try to take alarming parenting stories on social media with a grain of salt. After all, while the internet has made some aspects of motherhood so much easier (I basically Google *everything*), it can also quickly convince you that the entire world is a potential deathtrap. If you're anything like me, you may have previously brushed off claims that taking your little one down a playground slide can be dangerous, but honestly, this mom's warning about riding slides with your kid is definitely one you don't want to ignore.

In September 2015, New York mom Heather Clare brought her then-12-month-old twins, Meadow and Matthew, to a playground, and she thought it would be fun to give them each a turn going down the slide. But she explained to People that, her daughter's foot suddenly got caught as they slid down together, and Meadow actually ended up fracturing both the tibia and fibula in her right leg as a result.

If that story alone isn't enough to convince you of the potential danger of playground slides though, her accompanying photo almost certainly will: Clare and her husband later realized they had actually snapped a photo of the moment Meadow's leg got caught, and it's proof that these injuries really can happen so easily.

Clare's photo honestly feels pretty difficult to look at — you can literally see what is about to happen — and though she explained in her now-viral Facebook post that she was actually trying to stop and free Meadow's foot in the photo, having just realized that it had become stuck, it was too late. The accident meant that Meadow had to spend the next four weeks in a cast, so in an effort to help keep the same thing from happening to any other little ones, Clare has shared their story on social media every year, in an attempt to raise awareness.

And it turns out that awareness is very much needed: as much as Meadow's broken leg might seem like a freak accident, the reality is that slide injuries like hers aren't actually uncommon. A 2009 study from Winthrop University Hospital that analyzed pediatric leg fractures over an 11-month period found, for example, that nearly 14 percent of them happened because toddlers were riding down the slide with a parent, according to The New York Times. And in 2017, the American Academy of Pediatrics estimated that around 352,698 children under 6 were injured on slides in the United States from 2002 through 2015, most of whom sustained leg fractures. What's more, according to the AAP, toddlers between 12 to 23 months were the most likely to be injured, particularly when they were going down the slide on an adult's lap.

The danger, it seems, is mostly due to the fact that the added weight of going down a slide with an adult means that "there’s more forward momentum and speed," according to The Independent, making a break much more likely to occur if a child's foot gets caught than if it were to happen while they were alone on the slide. Yet Clare told Romper that, like many parents, she didn't realize prior to Meadow's injury that taking a baby down a slide could be dangerous.

"I actually had no idea that this could happen," she told Romper. "I know that kids can get hurt on playgrounds in many ways, but I didn’t know this specifically. Once it happened, I researched it and learned how common it is, but it’s also not well known."

Clare's Facebook post has now been shared over 86,000 times, with many parents commenting to say that they, too, had no idea about the danger. And while the story has also attracted comments from trolls shaming Clare over the incident, a number of parents have actually chimed in to say that their children had sustained similar fractures — which just reinforces the notion that slide injuries really do need to be taken seriously.

As much as it might seem kind of sad to think that taking your kid down the slide should be a big no-no, the AAP emphasized that there's actually no safe way to take a child down a slide, and that the best bet is to just avoid it entirely until they're old enough to go down alone. And since no parent ever wants to see their baby or toddler stuck in a cast, taking your child down the slide definitely seems like a risk that isn't even sort of worth taking.