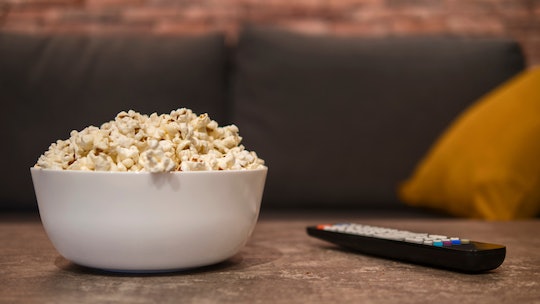 Any parent will tell you that toddlers are like magnets for danger — medicine cabinets, small toys, sharp objects, and more. But what about seemingly innocent things like popcorn. This favorite movie snack took a toddler from family movie night to emergency surgery to save his life. This mom's warning about toddlers eating popcorn will make you rethink your snack options.

Mother of three Nicole Johnson Goddard took to Facebook to share her frightening experience. Romper reached out to Goddard, but did not immediately hear back.

While enjoying a family movie night, she innocently let her 3-year-old snack on some popcorn, something she does quite often. But this time, he choked.

"Nash had a small choking episode but was fine. We didn’t see anything come out so we assumed he swallowed it. He seemed completely fine and continued to watch the movie. The only thing we observed was a cough he developed after the episode," she wrote in a Facebook post.

While the cough persisted, Goddard assumed Nash was catching the family cold that was going around. Three days after the choking event, she noticed that little Nash felt warm and was fussy. After a long night, Goddard noticed that Nash's breathing looked "labored." She called her family pediatrician, who said to bring him in immediately.

After an x-ray, a bronchoscopy confirmed the worst. It turns out Nash had aspirated the popcorn into his lungs.

"The body recognized it as a foreign object and put puss pockets around it. All the inflammation caused him to develop pneumonia in his left lung," Goddard continued.

Extreme inflammation made extracting the popcorn pieces difficult, and they weren't able to remove all of it in one shot. They had to wait a few days to perform the procedure again.

"The second procedure was done and once again poor guy had to be put under and rolled off to surgery," Goddard continued. "The doctor met us when it was over and said procedure was successful and he got the last piece out."

Now if that's not enough to keep the popcorn out of your toddler's reach. But popcorn isn't the only danger.

Popcorn, as well as other small food items such as nuts, grapes, seeds, and hot dogs pieces, should be avoided until a child is 4 years of age or older, according to Healthy Child.

Unfortunately, choking is identified as a leading cause of death and injury for kids, according to a 2010 study.

There are preventative measures that parents can take, according Kids Health.

Since her post, over 43,000 concerned parents and others have given their well wishes, with many voicing the fact that they didn't know popcorn could be so dangerous.

One user said, "Thank you for sharing and the warning. I had no idea. I had given popcorn to my kids under 5. Now I know not to. May God Bless and protect your family."

Another said that reading the post totally changed her upcoming plans. "Thank you for sharing. I was going to pop a bag and share with my 3 year old classes party. I'm glad I didn't now."

All parents are just trying to do the best they can. Bravo to this mom for getting the word out about her terrifying experience and thank goodness little Nash is well. So, if you have toddlers out there asking for popcorn, kindly point them in a different direction. Crackers anyone?