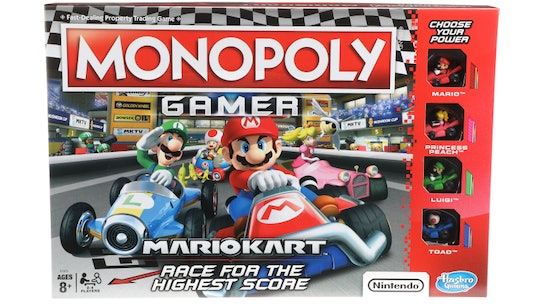 Board game and video game fans, it’s time to celebrate, because Hasbro is releasing a crossover of your two favorites — Monopoly and Mario Kart. The new Monopoly Gamer: Mario Kart Edition is an awesome mix of the two games you love and it’s taking them to a whole new level of fun. If you’re ready to leave the boardwalk to hit that Rainbow Road, here are some exciting things you need to know about Hasbro’s new Mario Kart Monopoly game.

Unlike the Monopoly Super Mario Edition, which was a themed version of the classic Monopoly board game, this Mario Kart version has tons of cool changes, twists, and features that will make it vastly different than the classic. While the concept of buying up as many properties as you can is still the same, the new game brings in all the excitement of a Mario Kart race, with a few rule changes and a lot more competition.

More Like This
Here's Why Your Vagina Burns After Sex
Celebrate Your Baby’s 1st Valentine’s Day With These Instagram Captions
These 30 Walmart Appetizers Are Super Bowl Snack Goals (Get It?)
Michigan Right-Wing Group Wants To Erase LGBTQ+ Sex Ed
What Parents Are Talking About — Delivered Straight To Your Inbox