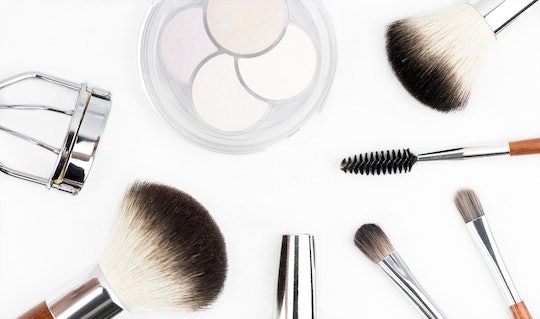 On Wednesday, just two days before the U.N. International Day for the Elimination of Violence Against Women, a Moroccan show featured a segment on domestic violence. Not about preventing it, or how big of a problem it is in the kingdom, but how to hide the evidence of it with the right concealer. Sabahiyat, a daily morning show akin to Today or Good Morning America, typically features lifestyle tips such as cooking or makeup instruction. It airs on the state-sponsored channel 2M. The tone-deaf segment drew outrage from viewers, according to the Guardian, and the episode has been pulled from the 2M website, although it's still available elsewhere. WARNING: the below video depicts a woman with bruises and may be triggering to those who have experienced domestic violence or abuse.

Moroccan women created a petition soon after the show aired, calling for the High Authority of Audiovisual Communication to penalize both Sabahiyat and 2M. "In the name of all Moroccan people, we denounce the message of normalization with violence against women," the petition reads. "We demand severe sanctions against this show." 2M posted an apology on Facebook, stating that the segment was "in complete contradiction with the editorial line of the channel," promising to "take the necessary measures towards the persons responsible for this error," and reiterating the station's commitment to women's rights. Sabahiyat and 2M have not responded to Romper's request for comment.

Lilia Mouline, the makeup artist who hosted the segment, defended herself on the radio station Yabiladi, according to Morocco World News. "We are here to provide solutions to these women who, for a period of two to three weeks, are putting their social life aside while their wounds heal. These women have already been subjected to moral humiliation, and do not need to also have others looking at them." Indeed, some women may have found the tutorial useful, but the cheerful manner in which Mouline advised that yellow tones camouflage "red punch marks," and that one shouldn't apply too much pressure "after the beating," as a black eye "is still sensitive," were too much for some viewers, according to the Washington Post.

The Post also reported that a recent survey found that 62.8 percent of Moroccan women ages 18 to 65 had experienced domestic violence, and only 3 percent of those who had experienced violence by their husbands had reported it to police. According to Human Rights Watch, Morocco's lax domestic violence laws are in violation of international human rights treaties, and both HRW and the United Nations have repeatedly called on Moroccan authorities to enact stricter legislation. Current Moroccan penal code criminalizes sex outside of marriage, but not marital rape, and does not mention domestic violence at all. Sabahiyat has been criticized for normalizing domestic violence in Morocco, but it clearly wasn't the first to do so.