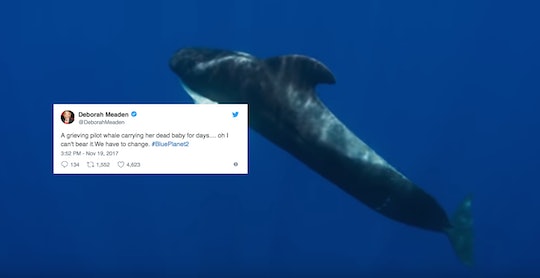 Decades of research has shown that plastic has a harmful — and deadly — effect on the world's sea creatures, fish, and birds. They became entangled, malformed or injured because of plastics pollution. Many animals even die from the chemicals and waste. The devastating ramifications of plastics pollution was the focus of Sunday's episode of Blue Planet 2, which featured a mother whale carrying her dead baby's body for days.

The BBC documentary followed, among other marine animals, a large pilot whale who held onto her dead newborn calf for days — a heartbreaking sight for many Blue Planet 2 viewers. During the episode, narrator Sir David Attenborough informed the audience that people "dump eight million tonnes of plastic into the sea" every year. The plastic breaks down, releasing chemicals into the waters and becoming toxic to the animals living within it. Attenborough then informed viewers that "the calf may have been poisoned by the mother's own contaminated milk," the Mirror reported.

The tragic story of the mother whale carrying her dead calf's body had Blue Planet 2 viewers upset, with many of them in tears. They took to social media to express their grief for the mother pilot whale, and disgust over how much plastic waste humans create.

According to the Center for Biological Diversity, the billions of pounds of plastics waste, including grocery bags, soda bottles, and six-pack rings, make up about 40 percent of the world's ocean surfaces. And those billions of pounds of plastic kill thousands of sea turtles and seabirds, seals, fish, and other marine animals each year. Additionally, according to the Center for Biological Diversity, nearly 300 species of wildlife eat and become caught in plastic litter.

That's not the only effects of oceans plastics pollution. The Center for Biological Diversity also reported that nearly 98 percent of all Laysan albatross chicks have pieces of plastic found in their stomachs. Scientists have also estimated that 60 percent of all seabirds have consumed plastic pieces; they predict that number will jump to 99 percent in the next 33 years, according to the center.

And, just as devastating, University of California at San Diego researchers have found that, each year, fish in the North Pacific eat 12,000 to 24,000 tons of plastic, causing intestinal injury and death, according to the New York Times. The dead fish then, in turn, transfer the toxic plastic chemicals to larger fish and marine animals who eat them for food. As Attenborough said in his narration, this chain of events could have contributed to pilot calf's death.

The producers of Blue Planet 2 wanted to dedicate an episode to the plastics problem because they often saw, as assistant producer Sarah Conner recalled to Newsbeat, "some form of plastic from a thread of plastic fishing line, sweet wrappers or plastic bottles" floating in the ocean during each dive, according to BBC.

Conner and the other producers and crew members would even witness the deadly effects of how plastic harms marine wildlife. The assistant producer continued, according to BBC,

I have seen dead birds with their legs entangled in plastic bags, so they could have died from not being able to feed or fly. I saw a dead leatherback turtle that died from entanglement in fishing rope.

But it doesn't have to be this way. Although stronger environmental policy can help protect the world's water and marine wildlife, changing this tide starts with humans. Let's commit to reducing our plastic waste and reusing products so there aren't more stories — many of which are untold — of mother pilot whales carrying around their dead baby's body because they can't let go.