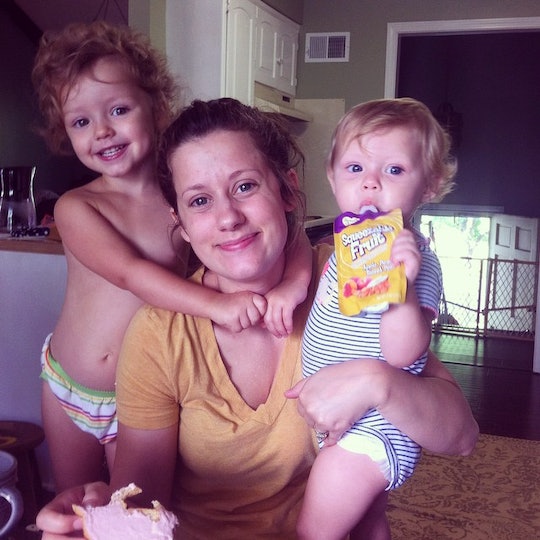 This Mother's Day, I Would Like An Actual Break

“What do you want for breakfast?” My husband asked.

“Well,” I began. I knew their dad didn't know how to make either and it was almost 9. I was starving and tired of being in bed. Ideally, my Mother’s Day would have begun two hours ago with my husband shooing the eager children out of our bedroom so I could get a few extra minutes of sleep. But instead, my husband also wanted to sleep in on his Sunday morning and the kids couldn’t wait to begin my day of pampering, so I responded graciously to being woken up earlier than necessary by a dog-pile of children while my husband pretended to sleep on the other side of the bed.

“How about biscuits and gravy?” It wasn’t really what I wanted, but it was a strategic choice. We had frozen biscuits, my kids all love sausage gravy, and I had recently taught my husband how to make it.

His face blanched. I realized too late he wasn’t confident in his gravy-making skills.

“If something else would be easier—", I said, and I meant it. The truth was, what I really wanted for Mother’s Day was to not have to make these decisions at all.

“Okay,” I said, rolling over, resigning myself to hanging out in bed while they worked on my breakfast.

“We have biscuits though, right?” My husband asked.

“Yup. The frozen ones. You’ll need to preheat the oven.”

I tried to ignore his obvious irritation. I just wanted to get out of bed and do it myself. I was starving and he appeared determined in his ineptitude, but I knew I couldn’t. Just as he was obligated to serve me on Mother’s Day, I was obligated to receive his service with a smile that suggested I had never felt so deeply loved as I felt in that very moment, as he sulkily prepared my breakfast an hour late.

“The Freezer.” I tried to keep my tone neutral, but the sheer obviousness of my answer made it seem snarky anyway.

He gave a huff of frustration and left the room. I settled in for a mid-morning nap.

As I continued to treat the moment lightly, only part of my laughter was sincere, the other part was simply my determination to keep the day a happy one.

Twenty minutes later I heard him shouting profanity. Something had gone horribly wrong. I jumped up and ran to the kitchen.

He was too upset to articulate the problem.

My anxiety grew. Had someone been hurt? I did a quick headcount.

“Why do you keep the powdered sugar right by the flour in identical canisters?” He demanded.

I scanned the counter and the crisis became clear. He had been attempting to thicken the gravy with powdered sugar rather than flour.

I laughed with relief. I grabbed the colander and rinsed off the meat while my husband continued to curse.

His mistake was hilarious and easy to make, I was sure he would see the humor. I tried to gauge which would make him happier, making redemption gravy or having me take over. He chose the latter. As I continued to treat the moment lightly, only part of my laughter was sincere, the other part was simply my determination to keep the day a happy one.

But he wasn’t to be convinced. It started with the gravy, but it became every subsequent interaction of the day. He wanted me to have a perfect Mother’s Day, but he also really resented having to think about it at all.

He was so anxious about giving me exactly what moms are supposed to want on Mother’s Day that he missed the mark on my only real expectation: a truly happy day. Not a day where I pretended to be happy, not a day I spent calibrating my expectations to keep my husband’s mood upbeat, all I really wanted was a day free from emotional labor where I still enjoyed the benefits of emotional labor.

Maybe Mother’s Day is just another invention of the greeting card industry, but the beauty of the day is how we finally recognize and celebrate work that feels unseen so much of the time. Much of this invisible work comes down to the emotional labor mothers undertake for their families every day: keeping everyone happy, healthy, fed, and socialized.

The mental load these responsibilities create is a lot. To be honest, I don’t love carrying the titanic weight of it on a given Tuesday, but I find it especially oppressive on the one day a year that is supposed to be about my spouse and children recognizing a burden that remains conveniently invisible the rest of the year.

But what I really, really want this Mother’s Day, is to not have to manage my husband’s emotions. I want to be able to have all these expectations without him deciding they are too high and therefore he is allowed to make a scene about them. For once, I want him to see this emotional work that I do, and I want him to take over for a single day. And we can see how it goes, maybe it can become a regular thing.