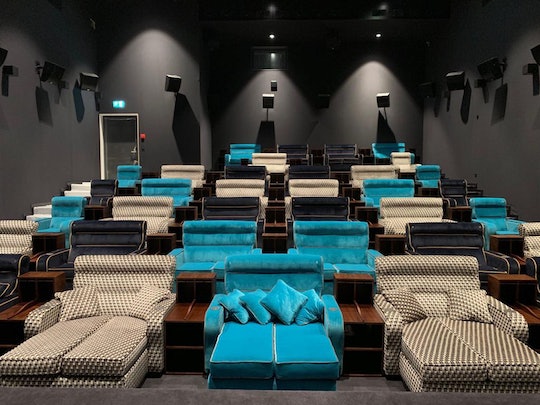 This Movie Theater Has Beds Instead Of Chairs, & Twitter Has Some *Concerns*

Luxury movie theaters are all the rage these days, but a movie house in Switzerland is taking things to the next level by putting beds in its theaters instead of chairs, attempting to literally recreate the experience of watching a film at home. The VIP theater intends to offer amenities exciting enough to lure people out of their Netflix and chill comfort zone, but the good people of Twitter have some thoughts on how the beds would actually work in real life. Their number one concern? Cleanliness.

Cinema Pathé Spreitenbach, a movie house in Switzerland, just opened "VIP" theaters, offering three different luxury film watching experiences. The theater getting the most attention is their "VIP Bedroom" theater, which has 11 double beds that allow viewers to fully relax as they enjoy a movie, according to The Independent. Each bed comes with sheets and an adjustable headrest, plus amenities that combine the comfort of a home viewing experience and the benefits of a traditional theater. A VIP ticket, which costs about $48.50 according to the Modern Met, gets you a bed for the movie, as well as complimentary drinks, snacks, and a pair of slippers to really make you feel at home. Here's what it looks like:

Looks pretty fancy, right? The other two theaters have similar amenities, with one offering comfy couches for viewers to sit on while the kid's theater opts for bean bags, to appeal to younger audiences. Although people do love cozy movie theater experiences, the responses from moviegoers to the VIP bedroom theater hasn't been entirely positive, based on the Twitter reactions.

For instance, some users are concerned the bedroom set up would make them fall asleep, which is a valid concern since the theater is literally designed like a bedroom.

Why would you pay close to $50 per ticket just to fall asleep mid-movie when you could do it for free at home?

But the biggest critique film fanatics had was how dirty the beds would get with so many guests using them. That's fair: Movie theaters are notoriously unclean. A 2018 investigation of the germs festering in movie theaters by Texas' KLTV found that movie theater seats are home to fecal matter, most likely as a result of people not washing their hands before sitting down to watch a movie. That's disturbing in and of itself, but it's especially concerning considering how much people eat at the movies. And don't even get me started on bed bugs...

As Kobeissi™ rightfully pointed out, patrons are concerned the beds would become unclean as a result of people, ahem, taking advantage of the privacy the alternative seats allow, leading to the spread of even more germs. And although "Operators have reassured customers that the beds are freshly made in between screenings" according to The Independent, changing sheets isn't always enough. Sweat and other bodily fluids can seep into mattresses themselves, which is much harder to clean. Mattress protectors can help with this problem according to Healthline, but there's no word on if Cinema Pathé Spreitenbach will have them. Cinema Pathé did not respond to Romper's request for a comment.

Only time will tell if people are willing to brave the theater despite hygiene concerns. In the meantime, sit back, relax, and wonder when this idea will come to the United States.