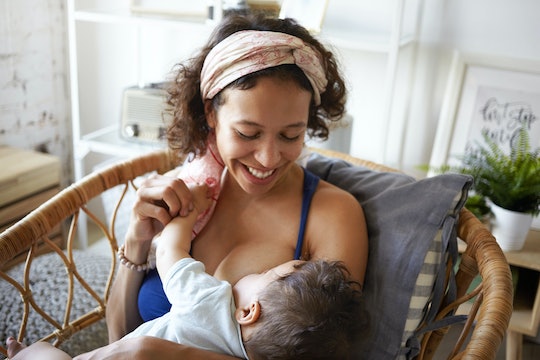 A big part of breastfeeding normalizing breastfeeding is presenting it as a normal part of daily life. Artistic representation can be help people to see things in a different light, breastfeeding included. In Glasgow, Scotland this mural of a mom breastfeeding her son is turning heads and sparking an important conversation.

More Like This
Are You Breastfeeding & Also *Starving* At Night?
Um, "Rusty Pipe Syndrome" Is A Thing, & Every Breastfeeding Mom Should Know About It
Experts Offer Tips On How To Wean — Whenever You’re Ready
Give Your Mom A Shout-Out With These Mother's Day Hashtags

The giant mural is the work of Australian street artist Sam Bates, who goes by the name Smug. His breastfeeding mural took more than a week to paint, according to Café Mom, and is located on the corner of High Street and George Street in Glasgow. The woman and child in the painting are meant to represent Kentigern, Saint Mungo being fed by his mother Saint Enoch, Daily Mail UK reported. Saint Mungo is the founder and patron saint of the city of Glasgow, making him an appropriate choice for the mural.

Breastfeeding advocates on social media are praising the mural for the message it sends to mothers, as well as the fact that it shows an older child breastfeeding, rather than a newborn. One person on Facebook wrote, "I love it. I also love that it's a mother nursing a toddler and not a tiny baby." Another echoed her sentiments, saying, "That's amazing and even better that they have used an older baby rather than a tiny baby."

The mural is making waves on other social media platforms as well. One user shared a photo of the mural on Instagram and praised the awareness that it raises for mothers:

I'm so in love with the new @smugone mural in Glasgow! It shows Saint Enoch (aka the mother of Glasgow) cradling baby Saint Mungo, the patron saint of the city. But to me it's also just a big fat tribute to all mothers and giving them an unmissable spot in the public eye. Well done.

A similar mural was painted in Barcelona in 2017 that showed a progression of a mother revealing her breast to feed a young baby. The artist behind this masterpiece is Hyuro, an Argentinian urban artist who painted the breastfeeding piece with BCN Transit Walls, for La Mercé, Barcelona's largest cultural, musical arts, and communities festival, according to the Huffington Post. Coincidentally, the festival is named after the Virgin of Grace, Mare de Déu de la Mercè, who is the patron saint of the Archdiocese of Barcelona. There seems to be a connection between saints and breastfeeding in street art.

A mother breastfeeding her child is not a new motif in art. The popular Instagram page, Breastfeeding Art, shows just how common it is to find nursing mothers in works throughout time. The page is the brainchild of artist and mother-of-three, Leigh Pennebaker and includes pieces like Roman sculptures, renaissance paintings, Japanese screen prints, and modern photography.

Pennebaker told HuffPost that she wanted to use art throughout the ages to connect mothers today with a long lineage of women doing what came naturally to them: “Women, and lactating women in particular, have been celebrated, honored, and deified in art throughout human history,” she said, pointing out that the Madonna and Christ, as well as lactating goddesses like Isis and Hathor regularly appeared in works. Her page contributes to the ongoing conversation about the role of breastfeeding in modern society.

Many works of art, including photography from recent decades, seem to suggest that the need to "cover up" when breastfeeding is a relatively new concept. A collection of photographs of nursing mothers from the '30s, '40s, and even as far back as the 1800s and as recently as a 1977 episode of Sesame Street, put together by Buzzfeed reenforces Pennebaker's belief that breastfeeding has long been a part of not only the art world, but daily life.

All of these works of art showing nursing moms helps to normalize the image of breastfeeding. From renaissance paintings to street art, mothers should feel confident in their place in the world and the recognition that these artists are giving them.