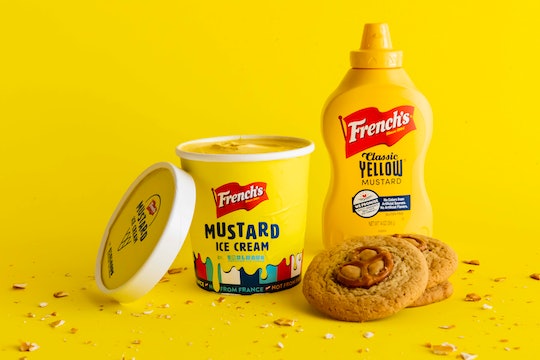 Mustard-Flavored Ice Cream Now Exists, & All We Can Say Is ‘Why’

I love condiments. I'm a firm believer that most foods are really just vessels for different sauces. It's become a running joke in my home that there is virtually nothing I won't eat with some sort of condiment on the side... and two unlikely brands are apparently interested in really testing that. Coolhaus' French's Mustard Ice Cream is the condiment-dessert hybrid that is going to settle the debate literally no one is having: do mustard and ice cream go together?

The intriguing, limited-edition dessert is being released in celebration of National Mustard Day on Saturday, August 3. Yes, that is a "real" holiday. The frosty concoction will be available in certain locations across New York City and Los Angeles. Oh, and did I mention that it's served with a pretzel cookie?

"As lovers of sweet-meets-savory, pure ingredients and unique creations, we are incredibly excited to be collaborating with French's Mustard in creating this one-of-a-kind product," said Natasha Case, Coolhaus CEO & founder, in a press release. "It's been so fun to explore this classic condiment in a whole new way and create an unforgettable thoughtfully-crafted ice cream flavor with an All-American taste."

It's that sweet and savory combination that may work to this flavor's advantage. After all, there's a reason why people love sugary, salty combos like chocolate-covered potato chips or French fries dipped in milkshakes. And if anyone is going to pull off this gutsy collaboration, it's the iconic mustard brand and Coolhaus, known for their unique flavors like Buttered French Toast and Balsamic Fig & Mascarpone.

French's Mustard Ice Cream will be available at a couple locations though. On the west coast, Coolhaus's Culver City, Los Angeles location will stock it from August 2 to 4 and again August 9 to 11. New York residents can get their hands on it from the French's Mustard Ice Cream truck, which will be in the streets of NYC on August 1 and 2 and end the tour in the Hamptons on August 3.

Not an NYC or LA resident? Don't worry. I'm not either, but my condiment curiosity will be satisfied nonetheless. French's was kind enough to post a recipe for a Mustard Ice Cream on their website, so you can celebrate National Mustard Day by whipping up a DIY version, (but it probably won't hold a torch to Coolhaus' version TBH). The recipe, which calls for a few things like heavy cream, condensed milk, and, of course, mustard, only takes about five minutes to make. However, it takes at least six hours to freeze, so I'd recommend mixing it up the night before that big National Mustard Day party I'm certain you're planning. French's even includes a recipe for pretzel brittle, if you're looking for that perfect mustard ice cream topping.

I won't lie, my first reaction upon hearing the phrase "mustard ice cream" was not exactly one of enthusiasm. In fact, I had to double check that this wasn't some strange April Fool's Prank that, you know, came eight months early. But we've all had moments of delightful surprise after biting into something we didn't have high hopes for, and this might just be one of those situations. At the very least, you'll get to say you tried it.