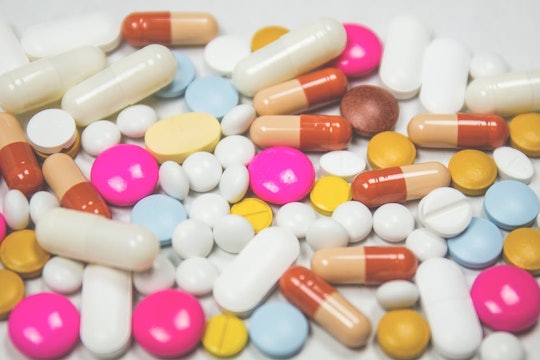 How Antidepressants During Pregnancy Impact Your Kid's IQ

When you’re pregnant, soon-to-be moms often worry about whatever they’re putting into their bodies. Whether it’s the food they’re eating or even necessary medications they’re taking for their own health, there’s always an underlying fear that it could harm their bundle of joy later in life. And when it comes to depression — which can be triggered by all the new pregnancy hormones or can just be a chronic condition a woman has been diagnosed with — women don’t need to necessarily worry. Taking antidepressants during pregnancy likely won't affect your kid's IQ, according to new research. The study found there is no significant link between a child’s intellectual disability and maternal use of the medication, which is contrary to some previous information that has linked antidepressant use to cognitive development problems in utero.

According to new findings published in JAMA Psychiatry, researchers from the Icahn School of Medicine at Mount Sinai in New York City found that children who had been exposed to antidepressants and those who hadn’t been exhibited only a slightly increased risk — only 0.4 percent — of having a lower IQ. As the researchers noted, this difference may come from other factors — such as age and mental health history — rather than solely taking antidepressants.

"The take-home message to clinicians from our study is that although there is an association between antidepressant use in pregnancy — especially SSRIs [selective serotonin reuptake inhibitors] — and intellectual disability in offspring, it is probably not due to the medication," Abraham Reichenberg, author of the study, told Medscape Medical News.

Based on results of this study, the association is due to other characteristics in parents that we know are related to intellectual disability, including history of psychiatric disorders, older age of mothers or fathers, and psychiatric disorders in the mother before pregnancy.

This study supports other recent studies that have shown that continuing depression treatment with antidepressants doesn't negatively impact a baby's health or raise the risk for miscarriage or autism — contrary to what previous studies had found.

Years ago, the Food and Drug Administration and other scientists warned that taking antidepressants during pregnancy may lead to cognitive impairment, autism, and health issues. But, in this year alone, several studies have proven that taking antidepressants during pregnancy doesn’t appear to increase these risks and — in most cases — it's more beneficial for expectant mothers to keep treating their illness than to abandon their medication.

However, women should always work with their physicians to help find a healthy treatment plan and discuss any intentions to stop or switch medications.

Depression is a very real illness and — left untreated and undiagnosed — it can be very dangerous, especially for pregnant women. And while this new research shows that expectant moms with depression should be cautious about their medication, treating their illnesses with antidepressants is safer than previously believed.