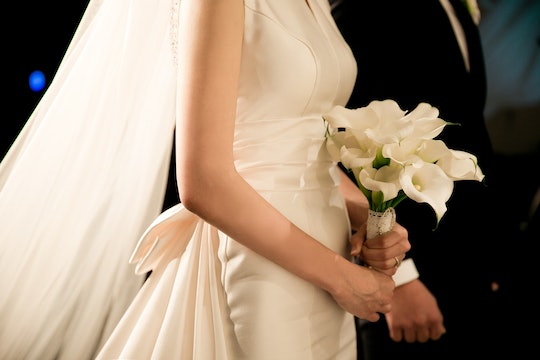 This Myth About Marriage Has Finally Been Debunked

The benefits of marriage are often debated and analyzed, especially among millennials. Although there a lot of pros to getting married (lower taxes, right?), some of these selling points are outdated, especially where it concerns health matters. According to a new study published in the journal Science Quarterly, married couples are no longer healthier than single people. It's a big finding, especially when numerous studies have cited the health benefits of marriage in the past.

Dmitry Tumin, a sociology researcher at Ohio State University and the author of the study, Does Marriage Protect Health? A Birth Cohort Comparison, surveyed married people born between 1955 and 1984. Tumin found that the health benefits of marriage have decreased over time, and he discovered the advantages older generations enjoyed were “completely attenuated among women in the youngest birth cohort,” according to New York Magazine. Furthermore, Tumin noted that the health benefits of marriage only pertained to couples who had been "married 10 years or more," according to Refinery29. It's also important to note the youngest married group didn't demonstrate "improved health benefits compared to their never-married contemporaries," according to Elle UK.

If you're trying to tie all the threads together, Tumin is essentially saying marriage is no longer a predictor of good health, despite its marked benefits for past generations.

Tumin's findings are especially interesting in light of the countless studies and articles praising marriage for its health benefits. In the past, marriage has been linked to a "longer" life, "fewer strokes and heart attacks," and a "lower chance of becoming depressed," according to Harvard Health Blog.

So, why have things changed?

Although there's no concrete reason for the shift, there's a lot of variables at play. For one, women now have increased socioeconomic freedom than they did in the '50s, for example. In the past, securing a husband was synonymous with securing stability. It might seem outdated now (and thankfully so), but marriage alleviated the stress a single woman would otherwise face. Now, marriage is not as necessary for financial stability, because women have more opportunities in the workforce. Not to mention fewer people are getting married in general, a trend that also could have affected the data.

Additionally, Tumin said marriages are more demanding than they used to be, according to Refinery29:

Work-family conflict has increased in the closing decades of the 20th century, and spouses’ actual time spent together has decreased over this period. Against a backdrop of greater demands at home and at work, and less time spent together, today’s married couples may indeed experience marriage more as a source of conflict and stress than as a resource that safeguards their health.

Obviously, Tumin's findings don't mean marriage is bad for your health — the study simply reflects societal changes and its effect on married couples. The only thing certain about Tumin's research is that society has evolved, and that's a good thing.