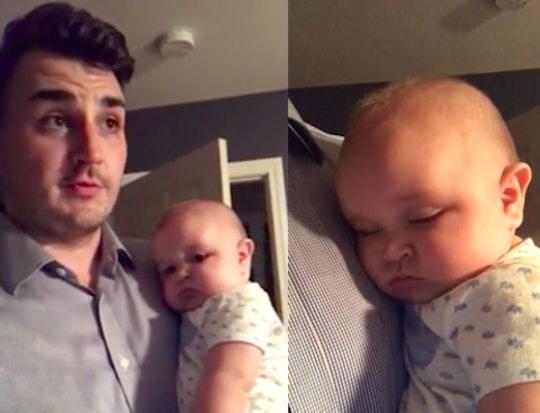 For most parents, it's an all-too-familiar situation. Your baby won't go to sleep, you've sung "Twinkle Twinkle Little Star" 20 times in a row, and you need to try something new, pronto. Well, a New York dad put his son to sleep with the best sleep hack ever, and we're definitely stealing his idea. Turns out that sometimes, at least according to this adorable and hilarious video, all you need to do to send your kid off to dreamland is to talk at length about your job. The more boring it is, the better.

Kevin Payne, a new dad from Cortlandt Manor, New York, has an adorable 5-month-old son named Carter. But Carter does not always take kindly to bedtimes. So Payne decided to try something beyond the basic lullaby technique, and thank goodness he took a video of the experience. As he talks about the ins-and-outs of his role as a technology resiliency manager, little Carter struggles to keep his eyes open. We can't exactly blame him. A brief sample of Payne's work talk?

A couple of times, Payne jiggles little Carter awake with protests that his work is not that boring. But chubby cheeked Carter is like a college student in a post-lunch lecture class. He tries, but there's no way he's staying awake. Now perhaps if you're, say, a firefighter or a lion-tamer, this hack won't work quite as well as if you do... well... something with data that involves a lot of jargon and running tests on Saturdays.

The Sun quoted Payne explaining his choice to talk to his baby about work, saying:

I'd been talking for a good 15 minutes before mentioning my work and that really seemed to do the trick. Being sleep deprived I find myself trying to make the best of these situations. Sometimes I will write posts at 2 a.m. detailing the random parenting thoughts running through my mind. My wife Eryn thinks I'm an idiot, a funny idiot though, and she loved this.

While it still may be unclear exactly what Payne's job entails, what is clear is how much he loves his son, and what a hilarious, super cute duo they are. There are a lot of smart baby sleep hacks out there, but this one may be our favorite.

More Like This
Gathre’s Winnie The Pooh Collection Is Finally Here
Reddit Applauds Mom Of Five Who Stood Her Ground & Left Sleeping Dad Behind
When I Travel, My Baby Sleeps In The Hotel Closet
The Best Back-To-School Sales To Shop Right Now