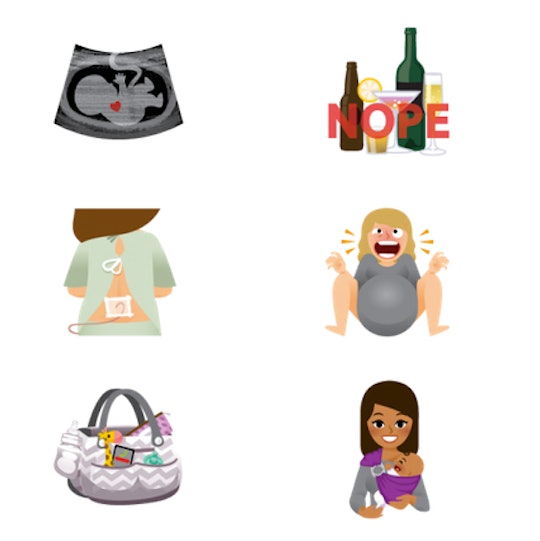 Let's be honest: emoji are basically life. Sometimes there is no better way to represent your feelings via text message than with a few choice icons — so much so that even Kim Kardashian got into the emoji game, releasing her popular Kimoji app, complete with belfie and twerking emoji. But after lamenting the fact that the emoji already in existence didn't offer them a way to capture the reality of motherhood, a group of moms got together to create EmojiMom, and the result is fantastic. Mostly because this new emoji app for moms perfectly sums up what motherhood is really like.

According to TODAY, the app (just released in the Apple App Store), is full of illustrations depicting all sorts of things that pregnant women and new moms go through — and text their friends about — often with a humorous slant. There are the adorable "comparing your baby's size to fruit" emoji, emoji for things like ultrasounds and diaper bags and maternity jeans, but, more importantly, EmojiMom also offers a variety of awesome emoji for the not-so-darling experiences of pregnancy (which, let's be fair, are the ones we most need to discuss with our friends anyway). Baby just spit up on your clothes? There's an emoji for that. You've just leaked breast milk through your shirt? There's an emoji for that. Sore boobs from breastfeeding? Overdue and dying to get that baby out already? Hooked up to a hands-free, double electric breast pump at the office and hating life? Yep, there are emoji for all of that, too.

The idea behind EmojiMom came a few days after app co-founder Sarah Robinson first returned back to work from maternity leave, and her son, Jack, peed all over her work clothes. Describing the frustrating, hilarious, OMG moment to her fellow mom friends, Natalie Ralston and Hannah Hudson, they all agreed there should be an emoji to describe those kinds of things. Robinson told TODAY,

Our main goal with this is for moms to feel understood and to feel like they can have a means of expressing what they're going through to other moms. So many people have pregnancies and labors and post-partum times that are difficult, if not traumatic.

Indeed, it's not just the funny stuff that the EmojiMom creators have focused on, but all sorts of challenging mom-realities, like struggling with fertility, taking anti-depressant medication, being sad about having to head back to work, the reality of C-section incisions, or even just the intimate details of what it's really like to recover from giving birth — mesh hospital panties, nipple cream, and perineal bottles (the quintessential post-delivery accessories people rarely warn you about in advance!) and all.

Those are the aspects that most moms really need to talk about, after all, and Robinson hopes that, with EmojiMom, it'll be easier for them to actually do it. She told Refinery 29,

If you have difficulty getting pregnant, or if you have a rough pregnancy, or a rough labor, and certainly when you have a newborn and things get very real, it really helps to connect with other women who have been through the same thing. It beats Googling at 3 a.m.

EmojiMom is available to download for iPhone, and according to the EmojiMom Facebook page, will be coming to Android in the future. And for the moms who have passed the newborn stage but still could use some emoji that totally get it? The EmojiMom ladies shared on Facebook that they plan on adding emoji for moms of older kids eventually, too.