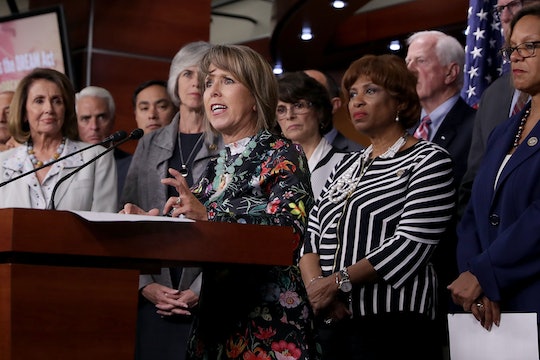 Recently sworn-in New Mexico Gov. Michelle Lujan Grisham announced Thursday she was signing two new executive orders meant to make good on one of her major campaign promises, and it's being hailed by teachers, parents, and students as a hopeful step in the right direction. Specifically, this new governor plans to end high-stakes testing in New Mexico schools, according to The Albuquerque Journal, by abolishing the Partnership for Assessment of Readiness for College and Careers (PARCC) test and replacing it with a new assessment system specific to the state.

Lujan Grisham said, according to the publication, that she expects the controversial test to be gone by the end of the academic year, if not earlier, and it's a big win for educators and parents, who have long argued that PARCC testing takes the focus away from actual teaching, placing it instead primarily on test preparation.

Lujan Grisham announced the executive orders in a tweet on Thursday, and explained that the first would ensure New Mexico would no longer use the PARCC standardized test, while the second would stop PARCC scores from being used in teacher evaluations. That is likely welcome news to many New Mexico teachers who saw the PARCC tests as punitive — so much so that some were considering leaving teaching all together.

For one, Charles Goodmacher, the government and media relations director for the National Education Association-New Mexico teacher's union called the move "a huge morale-booster" for teachers in the state, according to The Albuquerque Journal, and said "it could even convince some people who were thinking about leaving to stay longer.

And on Twitter, Las Cruces city councilor Gave Vasquez shared that his own wife, a first-grade teacher, had also been considering giving up teaching due to the pressure of having to dedicate so much time to preparing her students to take the online tests.

While Lujan Grisham has yet to announce who she will be permanently appointing to oversee the development of a new testing program in the state, acting public education secretary Lt. Gov. Howie Morales said that the decision to end PARCC testing was all about showing solidarity with teachers and families, according to Albuquerque's KOAT Action News.

"We are sending the message that the public education department is going to be here in support of our schools and our educators across the state rather than as a police department looking for areas in which we can shut down schools," Morales told KOAT Action News.

Without a clear plan to replace PARCC though, some educators are still worried about what's to come — the executive orders, after all, don't completely end standardized testing, they are just allowing the current system to be replaced by something else, and so far, no one actually knows what that might be. What's more is that, even without PARCC, New Mexico's education policy must still adhere to federal laws, according to KOAT Action News, which includes a requirement that teachers be evaluated.

But New Mexico won't actually be the first to do away with PARCC testing — in December, the New Jersey Superior Court struck down state rules requiring PARCC exams in order for students to earn a high school diploma, according to Pix 11 News, and in September, Maryland, like New Mexico, decided to scrap PARCC entirely for a state-run test instead, according to The Washington Post.

For her part, Lujan Grisham insists that the goal is not simply to abandon PARCC only to replace it with something similar. She told KOAT Action News that "getting a quality experience in [New Mexico's] education system is what [she is] after," and that the new policy would be "a commitment of creating a positive culture that focuses on the needs of the children."

And for now, at least, the executive order also represents something just as important: after years of former New Mexico Gov. Susana Martinez's controversial approach to education policy, voters are now at least taking Lujan Grisham's decision as a sign that she intends to follow through on her campaign promise to improve education in the state, and reduce the amount of unnecessary testing.

There's no question that, when it comes to standardized testing in the United States, both parents and educators often have strong opinions, and it means that officials like Lujan Grisham will certainly have their work cut out for them. But, for now, her early decision as governor seems to be a hopeful indication that a better system is to come in the state, and that both teachers and students could be better off as a result.