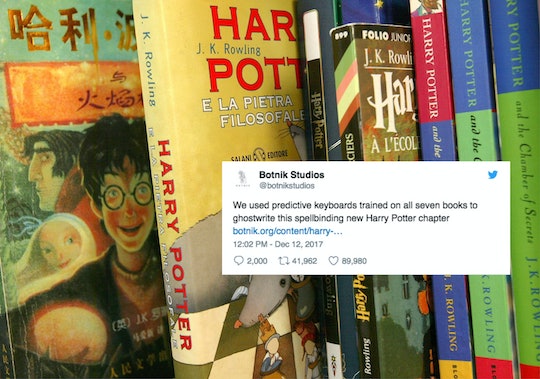 Movie screenplays and stage scripts aside, it's been 10 years since Harry Potter fans had a new novel to dig into, and you can only reread the original seven so many times. J.K. Rowling has (kind of) moved on from the wizarding world, so an algorithm trained to mimic her writing style might just be the next best thing, right? Once you read the new Harry Potter fan fiction written by a bot, you may not be very satisfied with the quality of the story, but at least you'll be less anxious about the coming robot uprising, because if this is any indicator, we're still way smarter than they are (just kidding, hail Skynet).

The artificial intelligence program was created by Botnik Studios, described on its website as "a community of writers, artists and developers collaborating with machines to create strange new things." And that's exactly what they did. They started out by typing all seven original novels into a predictive text program, according to The Verge, and then unleashed some writers to tweak it just enough to make it readable. It's like one of those Facebook posts that encourages you to complete a sentence only using the words that pop up on your phone's keyboard, which guesses the next probable word based on things you've texted in the past. But this bot knows only Harry Potter text, so it's bound to be... Well, see for yourself.

Harry Potter and the Portrait of What Looked Like a Large Pile of Ash. That's certainly an enticing title! Unfortunately, the story is incomplete; readers will have to settle for a four-page excerpt of "Chapter Thirteen: The Handsome One," which, frustratingly, does not touch on the titular portrait. It has the feel of a final chapter, but who knows what the bot was thinking? The language is stilted, which is to be expected, but it got quite a few things spot-on. Hermione appears to be the bot's favorite character, as her behavior and dialog is pretty reasonable compared to the rest of the characters. She always was the smart one; it's nice to see that even a clump of wires and microchips picked up on that.

"The castle grounds snarled with a wave of magically magnified wind," the chapter begins, which I guess could possibly be in a real Harry Potter book. It quickly veers off course, however: "The sky outside was a great black ceiling, which was full of blood." That sounds less like J.K. Rowling, and more like your cousin who spends all day smoking clove cigarettes and writing bad poetry, and refuses to answer to anything other than "Azriel Nightshade." But nobody's perfect, right?

The chapter follows Harry, Ron, and Hermione on their quest to defeat Voldemort and the Death Eaters, who have an odd, flirty exchange at the commencement of their secret meeting:

Harry, Ron, and Hermione quietly stood behind a circle of Death Eaters who looked bad.

"I think it's okay if you like me," said one Death Eater.

"Thank you very much," replied the other. The first Death Eater confidently lean forward to plant a kiss on his cheek.

"Oh! Well done!" said the second as his friend stepped back again. All the other Death Eaters clapped politely. Then they all took a few minutes to go over the plan to get rid of Harry's magic.

Also of note: Hagrid's furniture screams, Ron and Harry might be cannibals, "several long pumpkins" fall out of McGonagall, and Hermione scraps with a Death Eater who's wearing a shirt that reads "Hermoine Has Forgotten How To Dance," which is very rude, indeed. But the most memorable moment is probably when Hogwarts' smartest student confidently utters the password that unlocks the door to the castle roof: "BEEF WOMEN." I'd pay good money to see Emma Watson in that scene. Read the whole thing here.