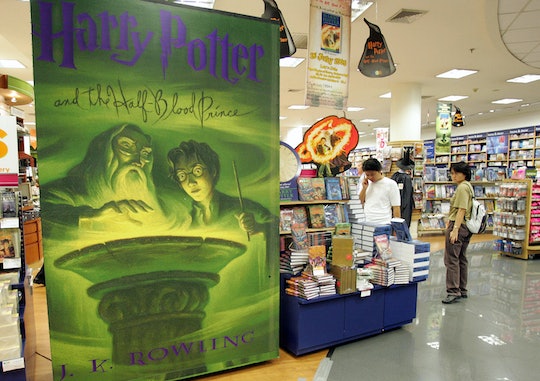 This New Harry Potter Theory Will Make You Cry For Years

Even amid all the heartbreak depicted throughout the Harry Potter books, Hogwarts was supposed to be somewhat of an oasis. Even though it's — spoiler alert! — the site of Dumbledore's death and the infamous, deadly Battle of Hogwarts (can't write any more about that right now, because feelings), later on in the series, it's also the place that saved Harry from his sad, sad life with the Dursleys. It's where he cultivated his friendships with Ron and Hermione and Hagrid and even got his first kiss! But it turns out that despite the wonder Harry felt when he first arrived at his new school (he was literally spellbound, admit it), there may have been a sad truth lurking among him and the other first years from the very beginning, before anyone ever donned the Sorting Hat. The newest Harry Potter theory comes from a particularly astute Tumblr user intent on breaking your heart, and it will make you cry for years.

This theory is about Hogwarts' class sizes, and it rings pretty true. During an interview way back in 2000, author J.K. Rowling said that there are about 1,000 students at Hogwarts. But the movies suggest that there are only about 18 witches and wizards in Gryffindor along with Harry, when the math would suggest that there should be closer to 35, because there are seven "years" at Hogwarts, and four houses. BuzzFeed did the math, so thank them.

So what the what? Tumblr user marauders4evr may have nailed the reason for the discrepancy:

What if there were less students in the Hogwarts Class of 1998 because the period when the other kids would have been conceived (1979-1981) was when Voldemort’s reign of power was at its peak? Between the dozens of adults who joined the Order, the dozens of civilians who were killed in Death Eater raids, and the dozens of adults that didn’t want to bring a child into the world, just then … It’s actually entirely possible that there was a baby drought for a few years in the wizarding world, leading to a smaller class size a decade later.

Basically, You-Know-Who made it so that Neville Longbottom never had any siblings (oh my gosh, now it's personal), because a Wizarding War raged before the world ever read the opening line of Harry Potter and the Sorcerer's Stone.

This is far from the first time that a Harry Potter revelation has seriously bummed us all out. Lord Voldemort and his Death Eaters desire a wizarding race composed exclusively of purebloods, and the likes of Draco Malfoy sling the pejorative insult of "mudblood" at anyone who's got some Muggle in their lineage. It's a clear allegory for real-life racism. And just recently, I was pretty much gutted when I read Emma Lord's Bustle essay about how the use of love potions throughout the series perpetuates rape culture.

Now I kind of want to go re-read every Harry Potter book and re-watch all the movies, but I want to be about 10 years old again when I do it, so all I can perceive is the magic.