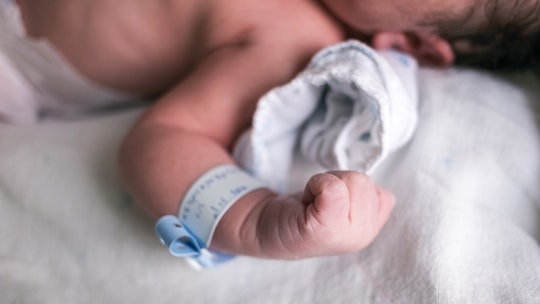 This New Screening For Newborns Could Help Doctors Find About 18,000 Conditions

There aren't really any parents out there who would tell you that they don't want their kids to be healthy. But, the ways in which parents go about seeking health for their kids varies greatly. So, even though this new screening for newborns could help find 1,800 conditions — an admittedly huge breakthrough — it isn't without its controversies. Doctors at Boston’s Brigham and Women’s Hospital have reportedly developed new screening technology that would test newborn babies for about 1,800 different conditions so parents can start treatment earlier, if necessary.

According to Scientific American, "Full genome sequencing of newborns for existing and potential disorders is now technologically possible and might soon be economically feasible," however that doesn't mean that all parents are interested in having their newborns tested as such.

One of the doctors at the Boston hospital, Dr. Robert Green, told local CBS News affiliate, News Channel 3, one of parents' top concerns was about privacy. "People are distrustful of information gathering," he said. "They’re hearing about all these break-ins and hacks." Parents are also reportedly concerned about genetic discrimination, which is what happens when people are treated differently by their employer or insurance company because of a gene mutation.

According to BabyCenter.com, "most states now test for almost all of 31 core disorders," which is practically nothing compared to the 1,800 conditions this full genome screening is said to be capable of testing for. However, according to a report from Scientific American, most states don't test for every condition when a baby is born, and there are some that could be detected with this new screening procedure, which in turn, could end up saving lives.

One life, in particular, could have been saved by this screening, Scientific American reported. A boy who was born in 2010 in Texas had reportedly completed all of the recommended tests for newborns at that time. And for seven months, the baby boy was doing fine — until he got sick and didn't get any better. The outlet noted that doctors couldn't figure out what was wrong with him, until he was finally diagnosed with "severe combined immunodeficiency, a genetic disorder otherwise known as bubble boy disease." SCID, if detected early, can be treated. Per Scientific American:

A bone marrow transplant usually can cure the otherwise fatal condition, because it serves to replace the compromised immune system with a healthy version. More than 90 percent of babies who receive transplants in the first three and a half months of life recover.

Unfortunately, this baby's SCID wasn't diagnosed in time and he didn't make it. However, after his death, his mother pushed to advocate for SCID screening in all Texas hospitals. "I wanted his little life to have meant something not just to our family," she said, according to Scientific American. "I wanted people to know this little baby changed things and opened eyes for a lot of people."

But SCID isn't the only condition that this new genetic screening would detect. Those 1,800 conditions could inevitably change the way doctors treat each baby that gets screened. In another study at the Rady Children's Institute for Genomic Medicine, researchers used full genome sequencing on 42 babies who were in the NICU. And for 43 percent of those babies, the researchers were able to diagnose a critical issue and then give personal medical recommendations, according to GenomeWeb.com.

With this trial testing, it reportedly discovered a partial biotinidase deficiency in one of the first babies tested in the United States. And had her parents not known of this condition — which the baby had shown no signs of — "it could have caused a permanent drop in her IQ," according to News Channel 3. Still, the outlet reported, about nine out of 10 families approached by Dr. Green have declined having their newborns tested in the same way.

While a breech in privacy, the threat of hackers, and the risk of potential discrimination later in life might scare some parents away, the idea that this new screening could literally save lives is pretty amazing. And while the fear of over-information is very much understandable, at the end of the day, an early diagnosis could possibly save a child's life.

More Like This
Here’s What You Need To Know About That Viral 1960s Baby Formula “Recipe”
Abbot's Formula-Producing Plant Can Reopen In As Early As 2 Weeks — Now What?
Can You Help Your Baby’s Hair Grow?
Two Young Children Have Been Hospitalized Because Their Formula Is Out Of Stock