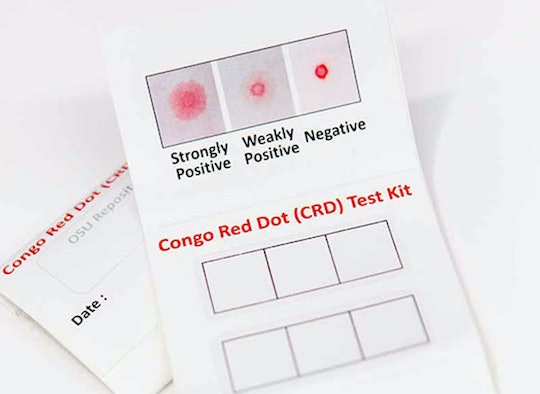 When it comes to pregnancy, despite all of the incredible medical advancements made over the last century, woman still face many threats in terms of their health. One such threat? Preeclampsia. Now, though, researchers have developed a new urine test that can diagnose preeclampsia in pregnant women, which can hopefully lead to getting them the help and treatment they need early on.

Announced earlier this week, researchers at the Ohio State University Wexner Medical Center have developed a test that can detect preeclampsia in pregnant women. Dr. Kara Rood, lead author of the research on the test and maternal-fetal medicine physician at Ohio State Wexner Medical Center, tells Romper in an interview this type of detection is possible because of a discovery regarding the proteins in the urine of pregnant women who have preeclampsia.

"We found out that the urine of women with preeclampsia has proteins in it, and these proteins are misfolded — like folded back on one another — as opposed to a strand of a protein," she tells Romper. "Because of this shape, it has a unique ability to bind to a red textile dye. Not misfolded protein does not have that ability."

With this discovery, Rood and her team were able to develop a test that women can take right in their doctors' offices while doing their other prenatal exams. And how it works is simple and quick; according to the university, the dye will react to "unique proteins in the urine of pregnant women with preeclampsia, providing an accurate diagnosis in just three minutes."

This is a breakthrough, given that preeclampsia has previously been hard to diagnose.

Rood explains that this is because the symptoms of preeclampsia can mirror other, benign issues. "A lot of the time, it presents with vague symptoms similar to pregnancy," Rood tells Romper, listing symptoms such as swelling, nausea, changes in vision and headache.

However, she went on to explain that a lot of these issues are just generally present in pregnancy as well. For example, headaches can increase if you're normally prone to migraines, and swelling and nausea are often part of a normal, healthy pregnancy as well.

Rood says that as the test is currently being reviewed with hopes of FDA approval, within the next few years, she hopes that the test will be available commercially, meaning that you'll be able to have it done when you go to your OBGYN.

However, the next biggest issue for women with preeclampsia is that, right now, there is no cure, other than to deliver the baby and the placenta, Rood explains.

This means that early detection is crucial in order to manage the symptoms, as well as plan for an early delivery if necessary, though hopefully avoid if possible.

“Giving birth is the only cure for preeclampsia, but it can develop as early as the second trimester. The quicker we identify women with the condition, the better chance they have of carrying their babies to full term and having a healthy delivery," Rood said in a press release. "This test helps us to quickly provide care to women with preeclampsia, while avoiding unnecessary admissions or even early deliveries."

According to the Preeclampsia Foundation, pregnancy conditions like preeclampsia, as well as other related hypertensive disorders, impact 5 to 8 percent "of all births in the United States." Though this test won't impact a large number of women, those who do have the condition could hopefully get the treatment they need to avoid some potentially severe consequences. In fact, the foundation noted that in Latin America, preeclampsia is the #1 cause of maternal death.

Though it may sound overwhelming, the great news is that tests are being developed and research is progressing to help us identify, treat, and hopefully save the lives of many pregnant women — one exam at a time.