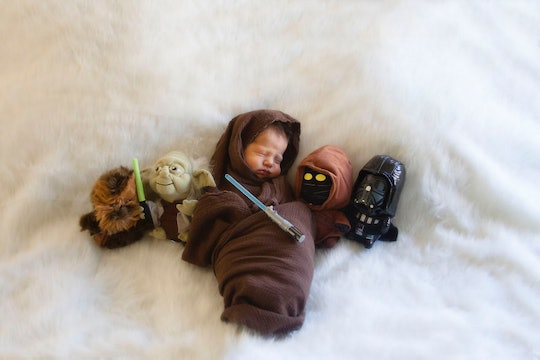 There have been countless Star Wars tributes involving geeky parents and their children out there, especially as we get closer and closer to the opening of The Force Awakens on December 18. Ewoks, padawans, little Princess Leias and Yodas galore are being photographed by their parents, but the Force seems to be particularly strong with this little one, who starred in an insanely cute Star Wars newborn photo shoot. According to photographer Trish McCoy, this little fella (her nephew, in fact) is a bit of a miracle.

After a bout with cancer, and then the onset of a rare autoimmune disease called Copper Deficiency Myeloneuropathy, McCoy’s sister was told that she wouldn’t be able to have any more children. Thankfully, she already had two of her own, but still, there are about 50 ways in which that must've been very difficult news to hear. But it turns out, that "no more kids" prognosis wasn't as iron-clad as she thought: She did in fact become pregnant again, 11 years later. It was a high-risk pregnancy, and the doctors weren’t very hopeful the baby would survive, due to her weakened immune system, but he did, against all odds. He has some health challenges of his own, but he is battling each one and coming out on top.

So what do you do to celebrate a little boy who has overcome all the obstacles thrown in his path? A little boy who continues to fight immune battles, and continues to win? Well, you have a photo shoot to show the world what an adorable Jedi this kid is, of course.

Take a look at these perfect photos of the cutest Jedi ever.

Clearly, he is with his people.

I think he may actually be an Ewok Jedi master. Is that possible?

The whole crew is watching over him to make sure he stays healthy.

"This is not the cute baby you're looking for. OK, it probably is."

Don't give in to the Dark Side, little Jedi knight!

Use the Force, little one. You clearly already are.