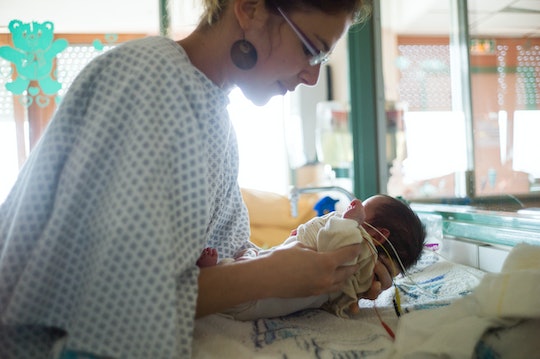 For years, parents have been hearing about how important it is to hold babies close soon after delivery in order to establish a safe, secure bond — and for years, moms with babies in the neonatal intensive care unit have worried about missing out on that essential bonding time. Now, one NICU is letting moms stay with their babies even as they're being treated — and it's a model that's bound to catch on at other hospitals, thanks to the closeness it provides moms and their newborns.

On Sunday, the British Columbia Children's Hospital and British Columbia Women's Hospital in Vancouver, Canada will be opening up their brand new Teck Acute Care Centre, a NICU with 70 rooms that allow moms and babies to recover next to one another, as Babble reported. The rooms are decked out with all the equipment needed to treat premature babies, as well as beds that fit two people, a refrigerator, a TV, breast pumps, and storage units. Because at a time when parents are already worried about their premature babies, the last thing they need is to be separated from them.

"The centre's neonatal intensive care unit ... is designed to keep new moms together with their babies in the same room, helping to promote bonding and reduce stress," Adrian Dix, the health minister of British Columbia, said in a BC Children's Hospital statement. "This model of care means less separation for families and is a key way to help ensure these vulnerable babies get the very best start in life."

The dual-care rooms will be available to low-risk mothers and premature newborns born after at least 33 weeks gestation. Experts hope that the new way of treating moms and their children will help ease the stress for everyone involved.

"There is substantive literature that reports the single most stressful event for mothers with babies in the NICU is separation, regardless of the severity of illness," Julie de Salaberry, director of Neonatal Intensive Care at BC Women’s Hospital, told Babble. She continued:

Not only do the rooms help keep moms and babies together, but they also have chairs designed to facilitate skin-to-skin holding (also known as kangaroo care), which can help regulate babies' breathing, reduce their stress, keep them warm, and regulate their muscular activity.

Moms who need medical treatment alongside their babies will be helped by the same nurses who treat their newborns, and the privacy of the single-family rooms will allow parents to bond in private — unlike many crowded NICUs. The lighting in the rooms is adjustable (to protect newborns' sensitive eyes) and the rooms have curtained areas where moms can breastfeed or pump in private.

According to The Vancouver Sun, expected benefits not only include quicker hospital discharge times and higher levels of attachment, but a reduced rate of infections and improved sleep, as well. And moms who have been able to stay with their premature babies have already sung praises about the program.

Mom Amanda Lockitch, whose son Elijah was born six weeks early, was able to stay in one of the rooms during a trial run by the hospital several months ago. "I would have been discharged a day or two after delivering him, but I heard about this trial and I wrangled one of the rooms so I could be with my baby the whole time he was in the NICU," Lockitch told The Vancouver Sun. She continued:

I felt like I got a good crash course in neonatal care from the nurses. ... As a parent of a baby who was in the NICU, I can tell you that I felt like I won the lottery by getting to stay in the room with my baby. I’m not a religious person but it was a real blessing.

The hospital will start accepting patients full-time starting this Sunday — and hopefully, new parents will start to see similar models spread across North America soon after.