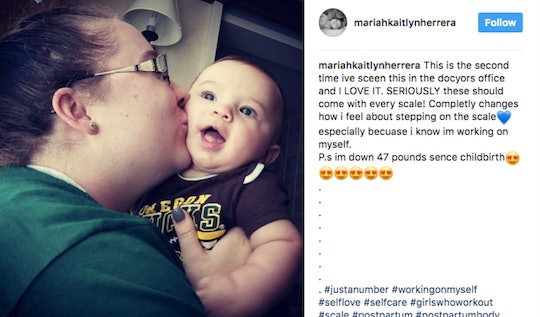 It's no secret that new moms often face unfair expectations about their post-baby bodies, especially when it comes to losing weight. The notion that new moms must get their pre-baby bodies back within a snap of their fingers is all too real, and this unnecessary pressure can be incredibly damaging to their self-esteem. If you're a new mom who has ever experienced pressure to lose "baby weight," you have to read this nurse's note to new moms struggling with their weight.

In March, a 25-year-old woman named Mariah Kaitlyn Herrera gave birth to her son, Isiah. Although Herrera was thrilled by Isiah's entrance into the world, she felt upset by the 100-plus pounds she gained during her complicated pregnancy. Herrera said, according to Today:

I had a terrible pregnancy, a complicated delivery and a 100-plus pound weight gain. I ate everything in sight when I was pregnant and it completely altered everything in my body.

Similarly to many new moms, Herrera felt pressure to quickly drop her pregnancy weight in the months following Isiah's birth. Her shame and self-loathing eventually became so intense that Herrera's said her doctor prescribed her anti-anxiety medication to deal with her weight check-ins, according to the Daily Mail.

Herrera explained, according to the Kid Safety Network:

Taking my weight has always been my least favorite part about going to the doctor but since having a baby that feeling has just gotten 10 times worse.

Amid all the stress and weight loss agony, however, something amazing happened — Herrera came across a sweet note written by a nurse at the Charnelton Community Clinic in Eugene, Oregon, where she is a patient. The message, which was aptly placed by a scale in the clinic, reminded moms that all bodies are worthy of love.

The nurse's meaningful PSA said, according to Refinery29:

This scale will only tell you the numerical value of your gravitational pull. It will NOT tell you how beautiful you are, how much your friends and family love you, or how amazing you are.

It goes without saying that there aren't enough amens in the world for this glorious body-positive message. The reality that all bodies are beautiful, wondrous, and deserving of praise isn't reiterated enough, especially to new moms. Although it's totally OK to want to lose weight after giving birth, it's also important to remember that your body isn't "wrong" because of weight gain, and it's OK to celebrate it no matter what form it may take.

Fortunately for Herrera, she took the nurse's message to heart.

Herrera said, according to Self:

I walked out of the office feeling confident. It made me feel like the number [on the scale] doesn't mean anything; it changed the way I was thinking. That just goes to show how far one small act of kindness can go.

If you Google "new moms and confidence," you'll find a ton of articles advising moms on how to feel sexy, beautiful, and desired after giving birth. It seems that society has come to normalize and even market the self-esteem issues of new moms, when it instead should be focusing on the message that all bodies are 100-percent acceptable, especially after they've completed the task of growing and delivering a human.

More Like This
Julia Fox’s Apartment Tour Is Peak Mom Realness
I Took Drinking Out Of My Bedtime Ritual & Unfortunately, It's Great
Marie Kondo Gives Up Tidying Post-Kids, Sparking Joy For Moms Everywhere
Paris Hilton Is Officially A First-Time Mom
What Parents Are Talking About — Delivered Straight To Your Inbox