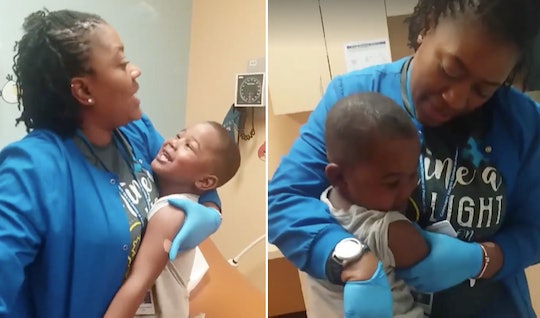 For kids (and their parents!), a quick trip to the doctor for routine vaccines can feel like anything but: between the crying, the negotiating, and the shrieking, what should be a quick in-and-out trip can turn into a whole day's ordeal. But one nurse's viral "magic trick" for giving kids shots is getting mad love from parents online, and it's worth a watch for anyone who's ever dreaded taking their doctor to the pediatrician.

Last Friday, grandma Tiffany Shelby Marshall uploaded a video of her grandson at the doctor's office to Facebook after being impressed by one super nurse's skills. "This was by far the funniest thing I've ever seen with this kid," Marshall wrote on Facebook. "THIS NURSE WAS ABSOLUTELY PHENOMENAL!"

At the doctor's office, Marshall's grandson had to have his finger pricked, followed by three shots — and as he watched the nurse prepare her equipment, he seemed nervous. The nurse, however, kept the young boy entertained with questions about the presents he got for Christmas.

"Good, I thought I was going to get shots!" the boy replied, smiling.

Of course, the magic trick was simply a countdown, followed by a finger prick, followed by the nurse squeezing out a bit of blood as "finger paint." She kept the boy so entertained by the promised magic trick of pricking his finger to create paint that he seemed to forget he was even scared in the first place.

For the next trick, the nurse got the young boy to give her a big hug ("Show me your muscles!") and close his eyes while she gave him a shot. Here, Marshall's grandson did realize he was getting an injection — but other than a quick squeak, he was fine, and he continued to be proud of the fact that he hadn't cried.

Throughout two more shots, the nurse congratulated him on being a big boy and kept him entertained with questions about what he'd buy with his $5 — which his grandma then gave him as a reward for being so brave at the end of it all.

Much like teachers, pediatric nurses clearly do the work they do for their love of kids — and in situations like this, their awesome way with kids helps make it easier to keep kids happy and healthy hassle-free. This nurse definitely deserves a round of applause.

If your little one is particularly scared of needles (and, I mean, aren't we all?), experts recommend using a few different tactics to help assuage that fear, according to Parents. Doctors recommend telling the truth ("yes, you will be receiving a shot, and it might hurt, but just for a quick second"), using an anesthetic cream prior to the shot, and distracting your child during the visit with light conversation or games like "I Spy." A bit of comfort and soothing from parents can go a long way before a stressful doctor's appointment

Small rewards can also be an effective way to get your child's mind off impending shots — so consider offering up a trip to the playground after the doctor's office or agreeing to play your kid's favorite game. Actually, after watching Marshall's video and how successful her grandson's shots went, you might even be tempted to try the $5 reward. (And might I recommend hunting down the most patient nurse in your doctor's office, and then making sure you send her Christmas gifts as a thank you.)