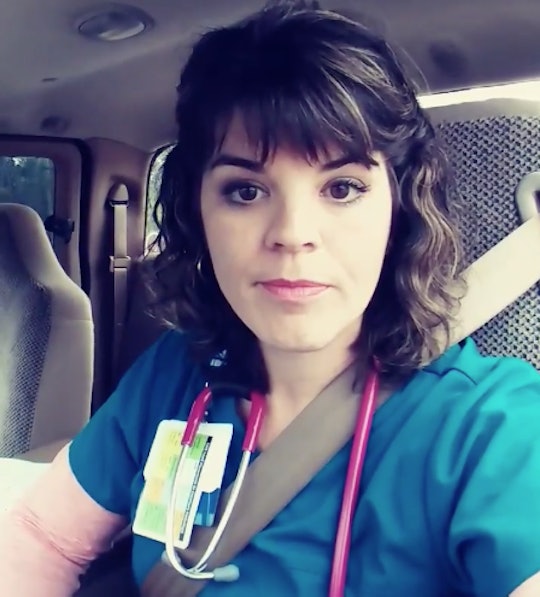 This Nurse's Rant On Spreading The Flu Is Going Viral, Because Her Tips Could Save Lives

Being an emergency room nurse isn't easy, even at the best of times. But now that the country is facing a particularly bad flu season that is sending sick people to the ER in droves? It's definitely leaving hospital staff feeling pretty drained and frustrated. After one particularly challenging night shift recently, Florida nurse Katherine Smith Lockler filmed a funny Facebook video to vent about some particularly annoying flu-related grievances. But this nurse's viral video on spreading the flu was also full of really valuable advice that can help people keep themselves — and everyone around them — safe from the dangerous (and potentially deadly) virus.

In the six-minute video shared on Facebook, which Lockler filmed in her car after finishing her 12-hour shift, she explained that, honestly, this year's flu season really is as awful as we've all been hearing. Lockler said, "it is really bad. It's killed some people. [It's] put many people in the hospital. And it's spreading like wildfire."

So since she sees the effects of the epidemic first-hand every time she goes into work, Lockler began to offer up some pretty important common-sense reminders to anyone even thinking of heading to the ER during flu season.

In the video, Lockler explained that it is "a cesspool of funky flu at the ER right now," (which, let's be honest, is probably the best way to describe it), and as a result, her first suggestion is that people shouldn't come to the ER if they're currently healthy. That might seem obvious, but Lockler noted that it's actually not uncommon to see people who aren't sick showing up to the ER to visit or support someone who actually is. And while that might be a nice gesture, all it really does is unnecessarily expose countless new people to the flu virus. To illustrate her point, Lockler shared a perfect based-on-a-true-story example:

If you have a team member from your softball team who is sick or injured, you do not bring the entire softball team in to check on them. Because, guess what? You just got maybe 15 new vectors, or carriers, of the flu by them walking in.

Right now, we have up to 25 to 30 patients sitting for hours in the emergency room waiting room. Some of them are not true emergencies, but they're waiting along with the flu right next to them. So guess what? Five flus came in, 15 flus walk out.

Just as important as not exposing yourself to the flu though is not exposing others to it unless you absolutely have to. While people in need of medical attention should definitely go to the hospital, Lockler explained that there are also plenty of helpful ways to treat the flu at home, like taking over-the-counter medication like acetaminophen and ibuprofen for fever and pain, and ensuring you are properly hydrated, either with water or Gatorade. Other useful pearls of wisdom? Lockler implored viewers to "wash [their] stinkin' hands," — which, honestly, is good advice in general — and to cover their noses and mouths with their sleeves when they sneeze instead of using their hands.

That's seriously important information, particularly given that widespread flu activity has now been reported in 49 states across the country, according to the Centers for Disease Control and Prevention. And, unsurprisingly, the CDC's advice for anyone looking to protect themselves from the flu is pretty similar to Lockler's: avoid close contact with sick people whenever possible, wash your hands often with soap and water or an alcohol-based hand sanitizer, and cover your mouth and nose when you cough or sneeze. The CDC also recommends that anyone who hasn't already received a flu shot this season get on that as soon as possible.

Those suggestions, of course, are valuable every year, but are especially important this year, when the flu epidemic is proving to be particularly bad. That's because the strain of flu virus that is prevalent this year — H3N2 — is one that often leads to more serious flu cases, according to TIME, as well as decreased vaccine effectiveness. Together, that means more people getting seriously ill, being hospitalized, or even dying from flu-related complications — making prevention and containment that much more essential.

For her part, Lockler tells Romper that while she wasn't at all expecting her video to be so popular, she is so happy that the message is getting across. She explained, "I think everyone needs to be reminded of the basics, [because] we forget that prevention is very basic, and very common-sense." And while Lockler may have originally just been blowing off steam with a funny Facebook upload, she says it was also meant to be helpful. Lockler tells Romper:

I am very excited that not only is this very important information getting out, but that it's allowing people to get a good laugh, and at the same time, learn life-saving, common-sense techniques that could help protect them and others.

This year's flu season is pretty scary to think about, especially if you have young children, or if you care for others who might be at a particularly high risk of complications. But Locker's video is an important reminder that the same prevention techniques promoted every flu season are still absolutely relevant, and that they can make a big impact when it comes to keeping people safe.