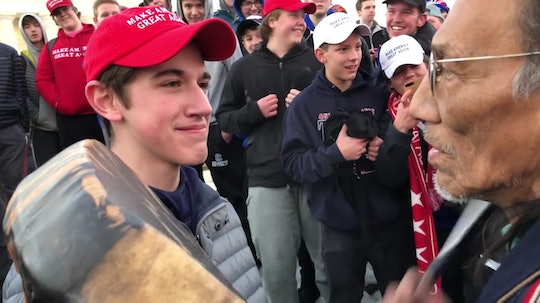 This week, people from all over the country traveled to Washington to take part in a number of various demonstrations. On Saturday, the third annual Women's March occurred in the nation's capital, but a day before, the crowds were supporting two very separate causes — the anti-abortion March for Life, and the Indigenous Peoples March, meant to protest the injustices faced by Native populations. Toward the end of the Indigenous People March though, this Omaha elder was taunted by students in MAGA hats who had come from a Catholic high school in Kentucky, according to Mashable, and the footage of the crowd of predominantly young white men laughing and imitating Nathan Phillips — a Native elder and former Vietnam veteran — is hard to even watch. But in a later video that has since also gone viral, Phillips explained the incident, and his strength and wisdom in the face of bigotry is truly remarkable.

In an article for Indian Country Today, writer Vincent Schilling helped shed more light on the clip by identifying Phillips and explaining that he was the "former director of the Native Youth Alliance," as well as "a keeper of a sacred pipe" who also "holds an annual ceremony honoring Native American veterans in the Arlington National Cemetery." Schlling also explained that, in the video, Phillips had been singing a Native American song known as the "AIM Song," while the young men laughed.

The footage has understandably caused outrage on social media given that it seems to perfectly encapsulate the reality that exists in America today — young, privileged white men feeling emboldened to act upon their ignorance, and attempt to intimidate people of color. And it definitely led to a significant amount of criticism for Covington Catholic High School, where the crowd seemed to be from.

Though the school did not immediately return Romper's request for comment, in a joint statement shared with The Cincinnati Enquirer Saturday afternoon, the Diocese of Covington and Covington Catholic High School "[condemned] the actions of the Covington Catholic High School students" and "[extended their] deepest apologies to Mr. Phillips," before adding that the two bodies were set to "take appropriate action, up to and including expulsion."

As easy as it is though to focus solely on feeling angry towards the young men, it seems just as important to listen to what Phillips actually had to say following the interaction. In a separate clip, first shared on Instagram by user ka_ya11, an emotional Phillips explained that he'd gone over to the crowd when he'd been singing and heard them chant "build that wall, build that wall." He continued,

Phillips then sighed heavily, and said, "I wish I could see ... [that] mass of young men put that energy into making this country really great, helping those that are hungry."

With his comments, of course, Phillips pointed out one of the most tragic aspects of the entire experience: while the next generation of young adults could be making the world a better, more inclusive place to exist, we are instead seeing a crowd of seemingly all-white young men using their privilege not to raise others up, but to demean them. And they were doing it while wearing hats that literally read "Make America Great Again."

While there is *so* much to be angry about here, for reasons that are so much greater than simply what happened in this clip alone, it seems that the students' awful behavior could at least inspire the rest of us to do more, like standing up against racism, and pushing back against the toxic masculinity that no doubt contributed to so many young men feeling like that behavior was actually warranted. As parents, that also means trying to raise our children so that they won't one day end up on social media joining in on such a heartless act, as racist and intolerant attitudes are often passed down.

As infuriating as it is to see the video, it's — at the very least — a reminder that we *should* still be very angry. As Schilling noted, for one, in comments to The Cincinnati Enquirer, what happened to Phillips on Friday is far from being an anomaly. For Native Americans, and all non-white Americans, it's basically an everyday reality. The only difference? This time, it just happened to be captured on video.