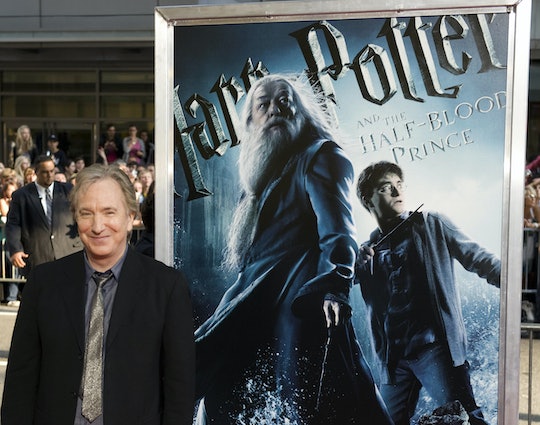 The Harry Potter world is in mourning. Early on Thursday, the family of renowned British actor Alan Rickman confirmed in a statement that the Die Hard and Harry Potter actor had passed away at the age of 69 after a battle with cancer. While some remembered him fondly for his turn in Robin Hood: Prince of Thieves, the majority of fans knew him best as anti-hero Snape from J.K. Rowling's behemoth Harry Potter series — which makes this one Rickman Harry Potter quote all the more touching.

At the end of the film's run in June 2011, Potterheads were really feeling the pain — not only was the massive film series coming to an end, but there were no more books to look forward to either. Rickman must have understood just how much the moment meant to fans and observers alike, because he immediately took pen to paper and wrote up this enchanting letter for Empire Magazine, in which he expressed just how much the series — both the film and the books — had meant to him as both an actor and a bystander to Rowling's extensive work.

"... A phone call with J.K. Rowling, containing one small clue, persuaded me that there was more to Snape than an unchanging costume, and that even though only three of the books were out at that time, she held the entire massive but delicate narrative in the surest of hands," Rickman wrote. "It is and ancient need to be told stories. But the story needs a great storyteller."

In previous interviews, Rickman had praised Rowling's ability to bring the Harry Potter stories to life, urging those children who had only seen the massively popular movies to hit the books as well. "The books are so full of all you need to know and so full of details," Rickman told HitFix in a 2011 interview. "That's why when I meet children and I ask, 'Have you read the books?' And they say, 'No, no, we just them on TV.' Then I say, 'Well, you've got to start reading the books.' And, of course, many of them do and become hooked in a very different way."

Rickman's understanding of the intrinsic capacity and value of a good story, as well as its staying power through the ages, showed through clearly in his work; Never one to shy from a difficult (or in some cases despised) character, the actor made it his business to force the viewer to understand the complexities of storytelling by giving each of his roles the dimensionality they deserved. In that sense, it seems Rowling wasn't the only great storyteller gracing the Harry Potter set.

Harry Potter fans in particular could attest to that much — going into the series, Rickman's Professor Snape was indubitably one of the most-hated characters in the series. By the end of 2011, Snape, with all his flaws and failings, had become a fan favorite — much of which could be contributed to both Rowling's storytelling ability, and Rickman's perfect portrayal of the character himself.

Read the full text of Rickman's Empire letter below:

I have just returned from the dubbing studio where I spoke into a microphone as Severus Snape for absolutely the last time. On the screen were some flashback shots of Daniel, Emma, and Rupert from 10 years ago. They were 12. I have also recently returned from New York, and while I was there, I saw Daniel singing and dancing (brilliantly) on Broadway. A lifetime seems to have passed in minutes.

Three children have become adults since a phone call with J.K. Rowling, containing one small clue, persuaded me that there was more to Snape than an unchanging costume, and that even though only three of the books were out at that time, she held the entire massive but delicate narrative in the surest of hands.

It is and ancient need to be told stories. But the story needs a great storyteller. Thanks for all of it, Jo.