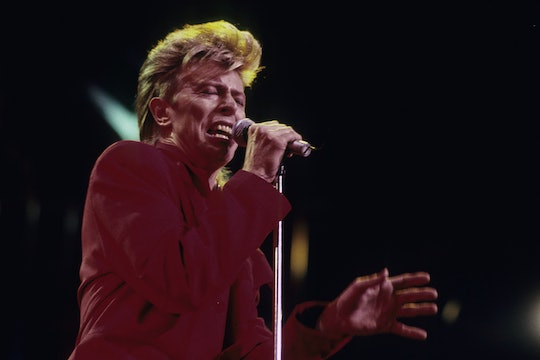 Musician, performance artist, and fashion icon David Bowie died on Sunday after an 18-month battle with cancer, according to the New York Times. Bowie's death was sudden for many fans, many of whom either didn't know he had cancer or didn't know that it had developed. Celebrities and musicians around the world reacted to Bowie's death with sadness, memories of their collaborations with him, or messages that he isn't really dead — they said he'll live on forever in the contributions he made to music, art, and fashion. There's one David Bowie quote that fans should remember him by, because he definitely wasn't someone who would think of death as the end of anything.

One of Bowie's most famous quotes was "The truth is of course is that there is no journey. We are arriving and departing all at the same time." The quote is especially important for fans to remember in light of Bowie's unexpected death. Too often people see death as the "end" of someone's metaphorical "journey." But, at the risk of sounding super cheesy, it would be wrong to say that this is the end of Bowie.

Bowie was the kind of person who didn't dread certain aspects of life — he seemed to revel in the strange, the difficult, the other-worldly, because each of those things had a hand in his music.

Bowie's most recent album, Blackstar, was released just two days before his death, on his 69th birthday. Bowie's long-time friend and producer Tony Visconti said it was intended as a "parting gift" to the world, according to the BBC. In a touching Facebook post Monday morning, Visconti said that Bowie's way of living to leave something behind or do something amazing — and, now, his way of dying — is what people should remember, according to Facebook:

He always did what he wanted to do. And he wanted to do it his way and he wanted to do it the best way. His death was no different from his life — a work of Art. He made Blackstar for us, his parting gift. I knew for a year this was the way it would be. I wasn't, however, prepared for it. He was an extraordinary man, full of love and life. He will always be with us. For now, it is appropriate to cry.

And this is why Bowie's famous quote about there not being any journey is something fans should never forget. Bowie didn't live his life to please any one group of people — he lived it to produce the kind of music he wanted and the kind of art that would leave a lasting impression. And even when he knew he was going to die, he didn't stop making music. He didn't do what many people do — retire or keep quiet — he did just the opposite. Because lived as though his metaphorical journey wasn't written in the same, finite way other human beings' journeys were written. Bowie always said he wanted to be superhuman, and he truly is.

Bowie also once said, "I had to resign myself, many years ago, that I'm not too articulate when it comes to explaining how I feel about things. But my music does it for me, it really does," according to the Independent. Bowie's fans had a connection to his music for this reason, but also because it gave him this quality of being immortal. His many different personas, from Ziggy Stardust to the Thin White Duke, allowed fans — for one of the first times in music history — to learn more about many different sides of the same creator. It always seemed like Bowie was starting a new journey before another one had even ended.

And the same can be said of his death. Yes, Bowie's death is tragic, and it took so many of his fans by surprise. But just before he left, he created yet another work of art for them to appreciate. Even in death, Bowie continued to remind fans that there's no script for either living or dying. Bowie's immortal quality will endure, and that's what fans should hold onto.