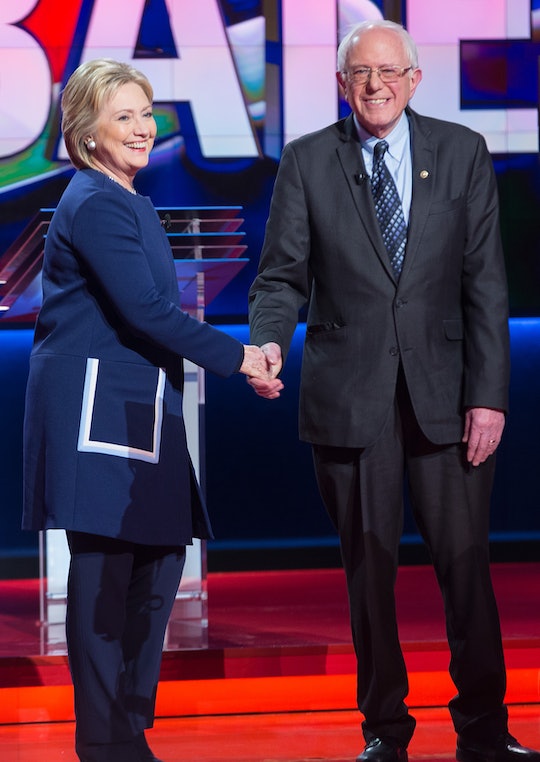 Sunday saw a hell of a debate between former Secretary of State Hillary Clinton and Vermont Sen. Bernie Sanders, where the two duked it out over the Flint water crisis, the Wall Street bailout, and the overseas export of jobs. The debate, hosted by CNN and held, fittingly enough, in Flint, Michigan was added on after Sanders drew closer to Clinton's spot as frontrunner — and it just so happened to be on the same day that Sanders won Maine. Clearly, the fight between Sanders and Clinton isn't over, and tonight's tense debate, along with the tweets that followed it, was proof of that.

Clinton pulled ahead on Super Tuesday, and many assumed she would be the automatic win after that. However, Sanders proceeded to recover on Saturday, when he won Kansas, Nebraska, and Maine, while Clinton only took home the vote in Louisiana. Clinton is still ahead in terms of delegate counts: Clinton has a minimum of 1,123 delegates, while Sanders has 484. The race is on until one of the two snags the 2,383 total delegates necessary to win the nomination, according to The Washington Post.

The impassioned debate proved that both candidates are incredibly well-versed on their points, and they both had new jabs to take at one another: Sanders claimed Clinton's support of trade policies contributes to the export of jobs from places like Flint to developing economies in Asia and Central America. Clinton said Sanders' refusal to vote for an auto industry bailout during the Bush administration could have cost four million employees their jobs.

This democratic debate might be the most aggressive one yet between Clinton and Sanders. (Personally, my favorite portion of the evening was when Sanders said, "Excuse me, I'm talking," to which Clinton replied, "If you’re going to talk, tell the whole story," because I loved the smart sassiness of them both.) But one tweet in particular really outlined why the fight between Bernie Sanders and Hillary Clinton is far from over.

The CNN debate has seen both Clinton and Sanders make many good points, and I feel like I'm still learning new things about both candidates this far into the election. The GOP debates have largely derailed into a mishmash of insults and repetition of the same topics, but this democratic debate has managed to draw even more policy points and opinions from Clinton and Sanders.

Democratic voters who have yet to decide on who they would rather see go against a GOP candidate are likely finding this debate useful, and I think the passion and knowledge going into the debate prove that Sanders and Clinton still have a very big battle ahead of them. As Twitter user Dave Kelly wrote:

A number of other great tweets came in on the Democratic debate, and they all had great points, too.

Admittedly, I also loved the tweets with '90s references and GIFs of the candidates' hands flying around. But the main takeaway from this debate and the opinions on Twitter? The fight's not over yet, boys and girls, and Clinton and Sanders are both well aware of that fact.