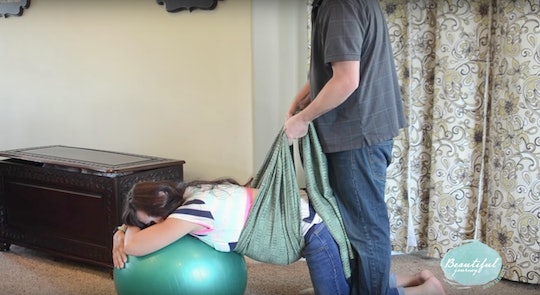 Can A Scarf Help You Induce Labor Naturally?

I was one of those pregnant women who probably read way more about labor and delivery during pregnancy than she should have. I read stories of beautiful natural births, and even orgasmic births. I became determined to go through labor without pain medicine, my breath and my doula guiding my child into the world.

Then I reached my due date, and my baby hadn't arrived. I became nervous that my desired natural, unmedicated childbirth experience was in danger, so I tried every natural remedy I had ever heard of to get my contractions started at home, rather than in a hospital. Eventually, I tried something I had never heard of before: a natural induction technique called Rebozo sifting.

Before I gave birth, I took a birthing class that extolled the benefits of unmedicated birth — faster recovery! Better bonding with your child! — and letting labor begin naturally. We were giving many tools to advocate for our desires to have non-medically-induced labor, since induction is commonly suggested by doctors who do not believe labor is proceeding quickly enough.

I did not want to be induced at all, but as my baby's due date came and went, it was starting to look more and more likely. My obstetrician, in accordance with current induction guidelines from the American Congress of Obstetricians and Gynecologists (ACOG), did not want me to go more than 14 days past my due date without medical intervention, so I was scheduled to be induced on July 10. I was incredibly anxious about it. In all of my reading about childbirth, I never saw anything that described the agony of inching beyond your due date; the mental weight of knowing that your life is about to change forever, at any minute, and not knowing when it's going to happen.

“Your belly is heavy,” my husband exclaimed.

None of my efforts were bringing me any closer to labor and delivery, and so I tried something that I never would have heard of, had it not been for my deep research into natural induction techniques: Rebozo sifting, a technique that has been used by Mexican midwives for centuries. (It's worthing noting that there isn't a ton of research available on whether or not Rebozo sifting is safe: although the American College of Nurse Midwives has endorsed it, it's not recommended for mothers with anterior placentas.)

A Rebozo is simply a term for a large scarf or shawl, which can be used to carry your baby once he is outside your body. Rebozo sifting allegedly helps to ease tension on a heavy belly, and can be done during late pregnancy and during labor. Rebozo sifting is also used as a method to get a baby into better position for birth and possibly avoid medical induction, as an improperly positioned baby can stall or postpone labor. While some people use Rebozo Sifting to help get their baby in a better position for labor, others use it during labor to ease the pain of contractions. (I ended up doing that, too.) I was hoping that Rebozo Sifting would ease my round ligament pain and generally relax my womb into getting things moving.

I got on my knees and leaned over a giant exercise ball while my husband stood behind me, opening a large, thin scarf that we found in our closet. (We used a scarf, but something like a large, long pashmina shawl could probably work just as well.)

He moved one hand up and the other hand down, switching that movement back and forth between his hands, effectively gently “sifting” my belly with the scarf. That part was a little weird, but it still felt pretty good.

He wrapped the scarf around the underside of my belly, grasping the ends of the scarf on both sides of my body. He then pulled those ends up, working against and relieving the force of gravity on my heavy uterus. That part felt wonderful. Then he moved one hand up and the other hand down, switching that movement back and forth between his hands, effectively gently “sifting” my belly with the scarf. That part was a little weirder, but it still felt pretty good.

My husband is a strong man, but he could only sift me for a few minutes at a time. “Your belly is heavy,” he exclaimed.

I enjoyed my experience with Rebozo sifting, but it did not, unfortunately, induce labor for me. Several days after my Rebozo attempts, it was time to head to the hospital. I pushed off a scheduled medical induction until the last possible minute, agreeing to come to the hospital no later than midnight on the deadline. I did end up having slight contractions before heading in, but not enough to avoid needing medical intervention.

Even though my home induction attempts didn’t get the baby out, I choose to believe that they greased the wheels enough to help me survive an epic labor and delivery.

With the help of two rounds of Cervidil and some Pitocin in the final overnight stretch, I ended up enduring two and a half days of labor at the hospital. For the final day of that labor, my contractions were so powerful that I was vomiting after every single one. Still, I survived the experience, and I didn’t even get an epidural until the final 12 hours of my birthing marathon.

Even though my home induction attempts didn’t get the baby out on their own, I choose to believe that they greased the wheels enough to help me survive an epic labor and delivery. The Rebozo Sifting that my husband performed on me during my active labor certainly helped ease some of the strain — at the very least, it was comforting to do an activity during labor together that we had already practiced at home.

On July 12 this year, we celebrated our son’s first birthday with singing and cupcakes. It wasn't the birthday we had expected, but it was a great birthday party nonetheless.