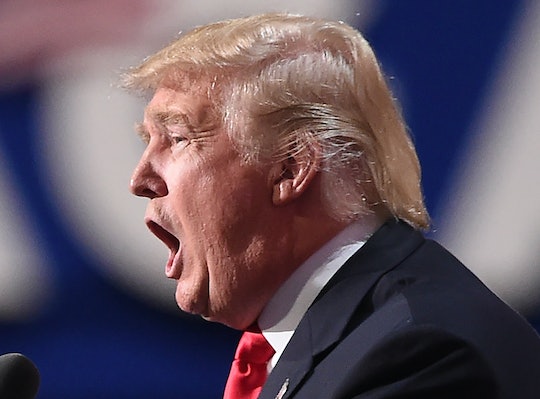 It's no secret that Republican presidential nominee and former reality TV star Donald Trump is seen by many as, quite simply, a bully. This unsettling public image was brilliantly called out at the Democratic National Convention when National Basketball Association (NBA) coach Jarron Collins asked a simple question: "How do you tell your kids not to be a bully, when your president is one?" This one line from the DNC gets to the core of why a Trump presidency is such a terrifying prospect.

Collins, who is an assistant coach for the Golden State Warriors, discussed his negative stance on a Trump presidency through the eyes of a father of three. After telling the audience about his wife and children, Collins didn't stop at calling Trump a bully. He asked the audience, "How do you tell your kids to respect their heritage — my wife is Mexican American — if their President disparages it? How do you tell your daughters they are empowered if their president reduces women to their physical appearance?"

The more that the public learns about Trump, the more difficult it is to defend his character. A recent New Yorker article, for example, featured an in-depth interview with Tony Schwartz, who was the ghostwriter of The Art of the Deal, the 1987 biography that made Trump famous. The article revealed truly disturbing details about Trump's personality.

According to Schwartz, who closely shadowed Trump for 18 months — even listening in on his phone calls — Trump fits all the criteria for a sociopathic personality. “I genuinely believe that if Trump wins and gets the nuclear codes there is an excellent possibility it will lead to the end of civilization,” Schwartz said during his interview with The New Yorker's Jane Mayer.

It really doesn't get more terrifying than that. Accounts like that one, in addition to Trump's array of racist and sexist public remarks, is why Collins appealed to the country's parents to think about what their children would learn under a Trump presidency.

And Collins wasn't the only person to call Trump a bully at the DNC on Monday. Vermont Sen. Bernie Sanders, during his opening remarks, classified Trump as "a bully and a demagogue."

We can only hope that come November, this particular bully won't win.