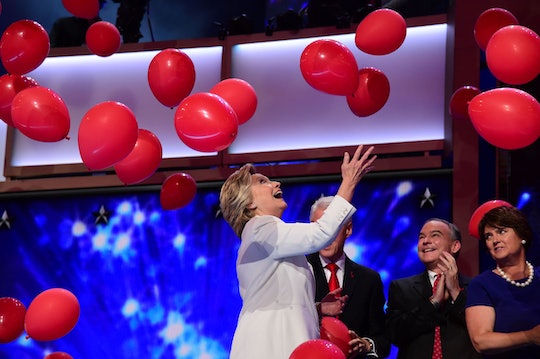 The final night of the Democratic National Convention Thursday was hugely important for Hillary Clinton, as she formally accepted the nomination as Democratic presidential candidate. But as big of an accomplishment as it was for her personally, it also an incredibly important night for women throughout the country (and the world) as they watched her become, according to CNN, the first-ever female presidential candidate of a major political party in the United States. The landmark moment probably meant something a little bit different to everyone, but for many American parents, it marked the night when they realized their children (especially their daughters) would be growing up at a time when the idea of a female POTUS and commander-in-chief is totally possible. And that's why this one photo from Hillary Clinton's nomination proves why the night was so historic.

Tucson, Arizona-based family physician, professor, activist and blogger Dr. Ravi Grivois-Shah's Twitter feed is full of updates about his life as a doctor and a father of an adorable little girl, Anjali, whom he raises with his husband, Tim. But a photo he posted Thursday of his daughter hugging the TV while he and his family watched Clinton accept the Democratic nomination at the DNC was pretty powerful reminder of the importance of the night. Grivois-Shah captioned the pic, "Our daughter & our family is with her! #SkysTheLimit #ImWithHer #Stronger Together."

Although not every Democrat parent's child may have hugged the TV upon watching Clinton, the photo does get to the heart of what a lot of us were feeling as she gave her speech — the sense that that moment was meaningful for reasons that went far and beyond just Clinton herself. As parents, it meant that our children won't have to grow up thinking that the president will always be a man by default. It means that our daughters will be able to watch a confident, intelligent, and accomplished woman addressing the nation, not in support of her husband or of another man, but for herself, and her own vision for her country — one that she has served for years. And it will mean even more to them to watch her do it while also going up against a privileged older white man who counts being openly discriminatory towards minorities and lacking in experience and a defined political platform among his strengths as a candidate.

Some women who aren't Clinton supporters have expressed their frustration over the fact that she has become the first woman to clinch the nomination, and that's a fair point if you don't support her views, or feel that she deserves your vote. But in an election year where so much is at stake — when you have a candidate who boasts about wanting to deport all Muslims or who makes unapologetically-sexist remarks about women or who wants to build a giant wall because he thinks Mexicans are rapists — the fact that this is the year a woman could head to the White House feels especially significant. Clinton may not speak on every woman's behalf, but what she has done — what she accomplished last night — is certainly an important step forward for women in all walks of life. It means that a woman can go head-to-head against a misogynistic candidate, that she can push through all the barriers that have held women back throughout history, and that an arena full of people will stand behind her and cheer while she does so. And that will teach little girls just like Anjali that they can do it too, and that there is nothing inherently less capable about themselves just because they happen to be in possession of vaginas.

My own daughter was too young to witness Clinton's big night, but one day, I hope to share it with her the same way that Grivois-Shah and his husband shared it with their daughter. I want her to see proof that she can follow her dreams without question, the same way her brother will be able to. And I want her to see that Clinton wasn't the only one kicking butt and taking names on behalf of their country — that other strong women, like First Lady Michelle Obama; or Sarah McBride, the first openly transgender White House staffer and first transgender person to speak at a political convention for a major party — can also be beacons of hope and strength, and that their voices matter just as much as anyone else's no matter what anyone tries to tell them.

It's hard not to smile seeing Grivois-Shah's daughter hugging the screen. After all, she might not exactly understand all the implications of the election or the DNC or of Clinton's nomination. But she totally got that it was a big moment, that the woman on the screen was doing something incredibly important, and that it was something she could be proud of. Last night, she witnessed a woman addressing the country who could become president in November. If that isn't cause to hug your TV screen with excitement, then I don't know what is.