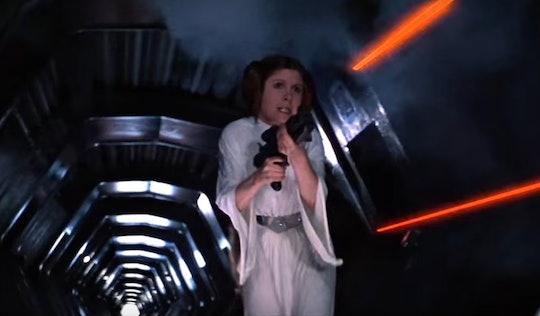 This One Princess Leia Scene Is The One To Watch

In the coming days, countless words will be written mourning the loss of actress Carrie Fisher, and by extension, Star Wars' Princess Leia. Even IMDb credits her most recent role in The Force Awakens as Princess Leia, completely glossing over the fact that, in the decades in between Return of the Jedi and the newest episode, Leia Organa had risen to the rank of General. Leia's always been undervalued. But this one iconic Princess Leia scene from A New Hope shows she was so much more than just a princess. She was a diplomat, a general, and a Force-sensitive bad*ss, and she deserves far more credit than she's consistently been given.

Leia's main role in the Star Wars universe was never as a princess, although Luke Skywalker and Han Solo originally treated her as nothing more: a damsel in distress that needed rescuing. While she did hold the title of princess thanks to her adopted mother, Queen Breha of Alderaan, she was also a member of the Imperial Senate, and a leader in the Rebel Alliance. Sure, she'd been captured by the bad guys, but only because she risked life and limb on a spy operation to destroy the Death Star. And when a smuggler and a farm boy showed up to try to save her, it was she who ended up saving them.

Only minutes into Luke and Han's sad attempt at a rescue mission, Leia wrests Luke's blaster away from him after chiding Han for failing to come up with a plan. "Somebody has to save our skins," she tells them. And all this after standing up to Darth Vader himself and refusing to turn on the Rebels even after being tortured, and seeing her entire planet blown up. Yes, it's Leia who helps the gang escape the Storm Troopers, Leia who comes up with the idea to brace the walls of the trash compactor, and Leia who, time and again, saves everyone's butts.

And still, when people hear the phrase "iconic Princes Leia scene," far too many recall "Slave Leia" with the gold bikini, chained up by Jabba the Hutt. No matter that she was captured by Jabba after infiltrating his palace in order to save Han. Or that she uses that same chain to eventually strangle her captor to death. General Organa, as I'll remember her, paved the way for women like Rey and Jyn Erso to lead the Rebels of the Star Wars universe, and her contributions mustn't be forgotten. When asked by Entertainment Weekly last year what lesson she hoped little girls would take away from her character, Fisher summed it up perfectly: "Never give up."