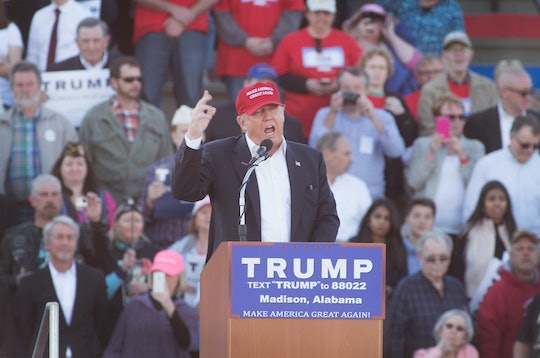 During Donald Trump's Super Tuesday victory speech, the Republican presidential hopeful insisted that he would be "good for women," and my ovaries spontaneously turned black and shriveled up. It's no secret that he's said scores of awful things about specific women (particularly Rosie O'Donnell and Megyn Kelly), but what about women in general? Is there any way that he could be telling the truth? Is he only disrespectful to individual women, but respectful on the whole? Well, no. In an effort to be concise, I've found one single quote that sums up Trump's stance on women, from his book, Trump: The Art of the Comeback (via The Washington Post):

It sounds like, to Trump, a woman isn't a human being, she's, instead, a sidekick. Her role isn't to earn a living or make a difference in the world; it's to meet her husband at the door with his slippers and a stiff drink. And, if that husband happens to come home late from work, she better not pull any of that sitting in the dark with an overcooked dinner crap — his time is his time.

In fact, it seems that he doesn't think a married woman should have any pursuits outside of serving her husband. In the same book, he laments that the "biggest mistake" he ever made with his ex-wife, Ivana, was to "allow" her to run his casino and hotel. He complained that all she ever wanted to talk about was how successfully she was running the properties, rather than "the softer subjects of life." Eventually, he wrote, "I soon began to realize that I was married to a businessperson rather than a wife." He is literally unaware that it's possible for a woman to be both a businessperson and a wife, and that is a huge problem.

Women are businesspeople (and writers, and doctors, and senators, et al.). And they can get sh*t done while simultaneously being a wife, or even a mother. That is, if their employers are supportive. Yet Trump remains silent on the issue of paid family leave (even though he told CNN back in September that he'd release his policy in "three or four weeks"). And, while employees of Trump Hotels enjoy such perks as "complimentary golf" and 1-800-FLOWERS discounts, it looks like women working for Trump will have to save up their sick days if they want to take any time off to care for a newborn.

Perhaps the most egregious example of Trump not respecting working women comes from a 2011 story that attorney Elizabeth Beck shared with CNN. Beck said that, during a deposition, she asked for a break so that she could pump her breast milk, and Trump had what Beck referred to as an "absolute meltdown":

When CNN questioned Trump's attorney Allen Garten, who was present during the deposition, not only did he not dispute the fact that Trump called Beck "disgusting," he agreed with Trump.

Trump can "cherish" women all he wants, but it seems as if that all stops the moment they step out of the kitchen or bedroom. Unfortunately for him, women exist in other spaces as well, and a presidential candidate would do well to learn that.