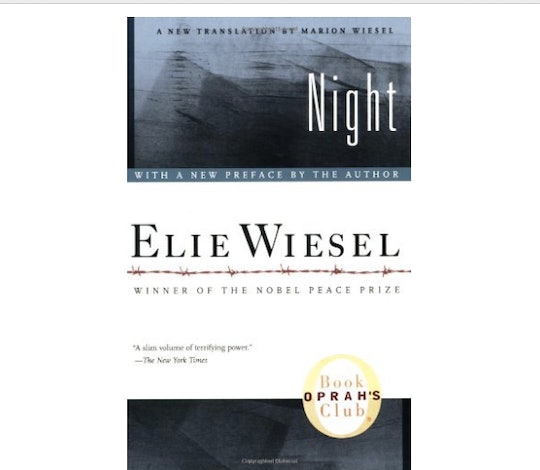 This One Quote From Elie Wiesel Is All About Standing Up

On Saturday, Elie Wiesel, a Nobel Peace Prize winner, died at the age of 87. One of his books, Night, a memoir about surviving the Holocaust, is required reading for most students everywhere. But he wasn't just a writer, he was an activist, and this one quote from Elie Wiesel pretty much sums up his message to the world. There are many good quotes (anyone who has read him has underlined a few passages, at least, right?), but standing up to power and hate, more than anything else, is part of his legacy. In Wiesel's Nobel Prize acceptance speech, he said:

We must always take sides. Neutrality helps the oppressor, never the victim. Silence encourages the tormentor, never the tormented. Sometimes we must interfere. When human lives are endangered, when human dignity is in jeopardy, national borders and sensitivities become irrelevant. Wherever men or women are persecuted because of their race, religion, or political views, that place must – at that moment – become the center of the universe.

There's a reason that Wiesel is required reading in middle and high schools everywhere — it's not just for a history lesson about the Holocaust, though his autobiography is one of the most useful and eloquent ways to get pre-teens to understand what World War II was all about. It's more than that.

His take on indifference is especially timely. In the wake of terrorist attacks, big ones like in Paris, Belgium, Orlando, Turkey, Dhaka, and the smaller acts of violence and hate that occur every day in every neighborhoods all over the world, his words are especially prescient. Indifference, or not doing anything at all, even when you know in your stomach that it's wrong, is akin to hate. Because it allows hate to gestate. It gives hate time to grow.

It's the same idea expressed in that famous poem by Martin Niemoller:

Elie Wiesel knew that speaking out, even when it seemed like it could do nothing, even after living in a concentration camp, was important. His experience and work is all about standing up, it's all about the importance of choosing sides. In a good way. It's about being informed. Saying your piece. Because shrugging your shoulders and assuming "I can't do anything," is worse than hate.

In his memory, think about his words the next time you back down for the sake of not causing a scene. Or not voting, or not signing a petition, or not boycotting places or people that perpetuate hate because it's easier to just not. Being on a "side" (shaken over ice with some understanding, if possible, for the other side, please) is as much a duty as it is a human right. It's about discussing over a dinner table, at the very least, oppression, racism, bigotry, misogyny — heck, even a tax on tampons — even if it ruins the moos. Picking a side isn't a bad thing when it comes to the important stuff. Just don't let it make you an a-hole.

Elie Wiesel's experience as a Holocaust survivor was about more than the Holocaust. It was about picking sides, being a critical thinker, and knowing when to stand up for other people. It's about acting and speaking up. And the way things are going? We could all do more of that.