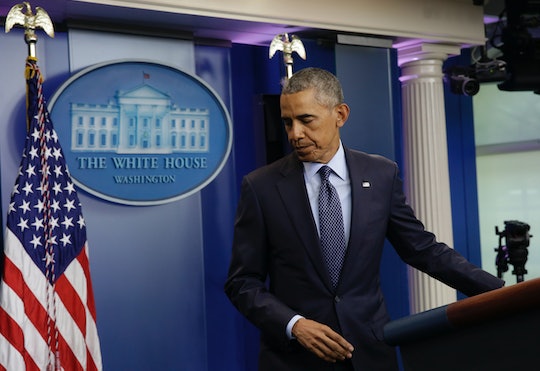 This One Quote From Obama Illustrates Why We Should Pay Attention To Victims, Not Shooters

In a moving speech on Sunday, President Obama addressed the deadly shooting at an LGBT nightclub in Orlando, Florida, which left at least 50 people dead and 53 people injured. The incident has since been classified as the deadliest mass shooting in U.S. history, above the tragedies at Sandy Hook Elementary in 2012 and Virginia Tech University in 2007. During a White House news briefing, one quote from Obama's official Orlando shooting comments stood out from the rest, emphasizing the importance of focusing the follow-up reaction and public response on the victims, rather than the shooter himself.

"This could have been any one of our communities ... As a country, we will be there for the people of Orlando today, tomorrow and for all the days to come," he said. "We need to demonstrate that we are defined more as a country by the way that [the victims] live their lives than the hate of the man that took them from us."

Obama spoke to the scores of violent gun-related incidents of late as well, highlighting the fact that the Orlando shooting served as "a further reminder of how easy it is for someone to get their hands on a weapon that lets them shoot people in a school, in a house of worship, or in a movie theater or in a nightclub," adding that the nation needed "to decide if that's the kind of country we want to be" or not. "To actively do nothing is a decision as well," he said.

While both statements were undoubtedly true, the former hammered home an especially important point: In situations of tragedy, focusing public efforts on the victims and their families, rather than honing in on those of the attacker, speaks volumes about the nation and its people in a way that nothing else can.

"... As Americans, we are united in grief, in outrage, and in resolve to defend our people," Obama said on Sunday, adding,

... So this is a sobering reminder that attacks on any American — regardless of race, ethnicity, religion or sexual orientation — is an attack on all of us and on the fundamental values of equality and dignity that define us as a country. And no act of hate or terror will ever change who we are or the values that make us Americans.

In the coming hours and days, we’ll learn about the victims of this tragedy. Their names. Their faces. Who they were. The joy that they brought to families and to friends, and the difference that they made in this world. Say a prayer for them and say a prayer for their families — that God give them the strength to bear the unbearable.

Unifying the country in understanding and empathy, rather than scouring the internet for details on the Orlando is something everyone can get behind easily enough. Let's just hope everyone jumps on board.