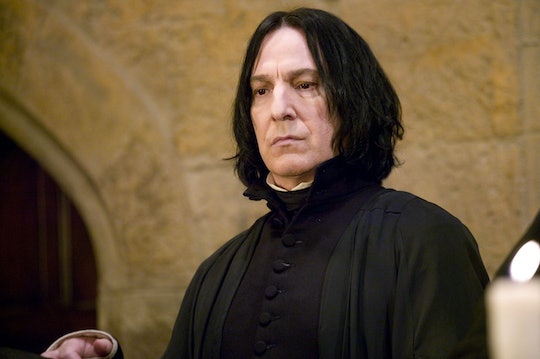 This One Snape Quote Proves Why Alan Rickman Will Live Forever, Always, For Harry Potter Fans

Accio Kleenex. Because on Thursday came news that Alan Rickman had died at 69 years old, after suffering from cancer. It was a death that came all too soon for Harry Potter fans who grew up watching Alan Rickman breath life into Severus Snape, the complex character many fans of the franchise loved to hate. But there's one quote in particular from Snape that illustrates why, despite Rickman's death, his legacy will live on. And it's a quote that's familiar to any fan who read, re-read, and re-re-read the series. "After all this time?" "Always."

The quote in question came when Snape conjured a Patronus in Harry Potter And The Deathly Hallows that was identical to Lily Evans' Patronus. (Lily Evans, of course, being the mother of The Boy Who Lived, Harry Potter.) Dumbledore asks Snape, "After all this time?" Replies Snape, "Always." It's a moment of significance for fans of the series, showcasing (spoiler alert) that Snape was forever in love with Lily. That he could never forget Lily. That love is an emotion that always lingers, even after death, and even in those who seem incapable of the feeling.

And it's a quote that takes on particular meaning following Rickman's death. Because, like Snape's love for Lily, Harry Potter's fans' love for Rickman and what he brought to the character of Snape will never fade. No Memory Charm could make fans forget that, after all this time — five years after Harry Potter And The Deathly Hallows — Part 2 hit the theaters — Rickman and Snape will live on, always.

Upon learning of Rickman's death, Harry Potter fans raised their wands in memory of the actor, and immediately conjured the quote to celebrate Rickman's legacy.

And there's little doubt in the days, months, and years that pass, that this love for Rickman will hold strong. Always.